In three consecutive posts, the former Victoria’s Secret Angel wore what looked like a simple seamless, sleeveless top, first in white, then nude, and then white again – and a quick scroll revealed she’d previously worn it in black too.

With over 10m followers on Instagram and impeccable style, model and actress Rosie Huntington-Whiteley is a source of fashion inspo for many. But while she no doubt has way more designer clothes than we could ever dream of (and an A-lister budget that means she can afford to top them up), her recent Instagram posts prove she loves a bargain find as much as the rest of us.

Fans flocked to comment and find out where the chic top was from, and were delighted to hear back from Rosie herself who revealed it was in fact a £12.99 Zara halterneck bodysuit, in three different colours. Yes, £12.99. Seriously. And as for the stocking up? We totally get it – who hasn’t discovered something that just *works* and gone on to buy it in every shade? That’s our kind of shopping.

Showing off how versatile the Zara basic is by mixing it with some designer pieces, Rosie first paired the black body with a full length white Chloe skirt and black heels, her hair slicked back into a bun – a strong look for a day at the office. 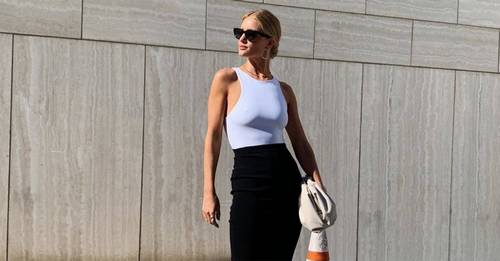 The next outing for the top saw her pair the white bodysuit with a killer tan and plenty of gorgeous jewellery including a Bvlgari watch, in a close-up which she captioned ‘Summer Fridays!’ If only our Fridays looked like that…

The photo with the most likes, however – a whopping 415k and counting – was the nude version of the body, which she teamed with white high-waisted, wide-leg trousers from Isabel Marant and nude heels. So slender you can see the star’s abs through the clinging top, the look sparked thousands of comments as eagle-eyed fans spotted the familiar shape. The neutral look was completed with a $630 large slouchy clutch bag by Bottega Veneta – not quite so affordable, but we’re loving the combination.

On a roll, Rosie then followed with another Insta shot where she recycled the white body and the clutch bag together with a slinky black pencil skirt, with the caption ‘Back to business’.

It’s bound to be the talk of the high street, although the bargain bodysuit has surprisingly not sold out yet, with availability at Zara online in black, nude, white and khaki. Given the fan frenzy, chances are it won’t be in stock for long…

Ovie Soko on chivalry, fashion and life after Love Island