The divorce absolute has been polarising. On one hand it has been met by tears of the British people. On the other hand, it has been met with cheers. This parting of the ways, has led to the rise and open boldness of what I like to call “dinner party bigotry”.

The racist banter heard behind people’s front doors has now begun to bubble up and spill over and out of living rooms and onto the streets.

Last month was pretty eventful. Boris celebrated finally getting Brexit done with the UK crashing out of Europe at 11pm on the 31st Jan. And then of course there was Megxit. In the weeks that have followed, these events have highlighted the real racial tensions we face in the UK today.

Brexit has given confidence to the anonymous author of a Happy Brexit Day sign, which was hung in a block of flats in Norwich. The offensive sign addressed residents, warning them not to speak in foreign languages as it said the “Queens English is the spoken tongue here” and celebrated the moment “we finally get our great country back”.

I’m a proud immigrant to this Fair, progressive and outward looking country, which I love so much. However, I haven’t felt this type of hostility since the 1980s when I was a child. At the time, the very sight of a St. George flag would send a shiver down my spine, as it was usually a sign the owner was part of the BNP or simply xenophobic. Brexit, and with it Britain’s supposedly new found sovereignty, has- inadvertently perhaps – given permission and provided a safe place for many to unleash their racism. 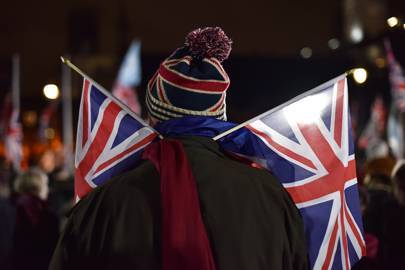 Don’t believe me? Ask your friend/ co-worker/ flat mate who is seen as “other” how they feel. Only the other day I was in Austria on a press trip and I was asked by a fellow Brit, “where do you belong?”. This question took my breath away, as I had never been asked this before, especially with my very British accent. It was always assumed I was a fellow Brit. However, in this new political climate, my sense of belonging has been brought into question and deemed as acceptable and polite chit chat.

Add to this the recent inflammatory remarks from Laurence Fox, who seems to have stepped forward to take up the role as the face of white privilege, and the issues of casual racism and underlying social tensions in the UK, long lurking in the shadows have come to the fore. Case in point the coverage of Megxit. This has shone a light on an unfair bias, which I often face in my everyday life, that has left many perplexed, confused or in denial that such 21st Century racism exists in the UK today.

Meghan hasn’t been called the N word, there are no burning crosses on her lawn and she hasn’t been threatened to be lynched, so people haven’t equated her media coverage with racism. To anyone who doesn’t understand what “casual racism” looks like you have to look no further than the way the press report on her. When Meghan cradled her bump the press labelled her vain, prideful or ‘acting’ and when Catherine, Duchess of Cambridge was pictured doing exactly the same thing in the Daily Mail, she was reported as “tenderly cradles her baby bump…” Meghan has also been called “uppity” by Eamonn Holmes, a term historically used by Southern Slave owners to describe their slaves who dared to think they were equal to them by looking them in the eye or answering back. Meghan has also been labelled manipulative and made out to be a siren come to steal away our fair prince of the realm.

Her background has also been reported in a way that highlights this casual racism – her African American heritage and her accomplished mother, Doria Ragland being reduced and referenced as simply being a descendant of slavery. While that aspect of her lineage is true, think of it this way, how often do you see a middle aged white male MP being described as, “and his great great grandfather used to work in a mine up north”.

I experience some form of casual racism on a daily basis. It’s me sitting in restaurants and seeing my white friends’ water glasses be filled up, whilst mine is left empty. It’s sitting in a restaurant working for an hour with no menu and as soon as my blonde blue eyed husband walks in and sits with me, he’s handed a menu instantly. It’s a quiet toxic gas of being “othered”, being seen as less than and of people assuming a negative back story to your upbringing and views. It’s like being lightly slapped 5 times a day, while my husband gets 5 light hugs a day while going about his daily business. Both are entirely based on melanin. And it is the real reason behind the backlash, bias and added venom when reporting on Meghan Markle. Megxit – her and Prince Harry’s history making decision to step back from Royal life and live in Canada – has just created a safe space for people to openly insult her.

When Laurence Fox made headlines for claiming Britain is not racist but “the most lovely, tolerant country in Europe” and “it’s so easy to throw the card of racism at everybody and it’s really starting to get boring now”. (He also went on to say Sam Mendes’ new film ’1917’ depicting the horrors of the First World War was “forcing diversity on people” for having a Sikh soldier in the film) his views echoed many in this country. It is the very definition of privilege – when you don’t think something is a problem because it isn’t a problem for you.

Laurence has no idea what it feels to be “other” and considered on the outside of power. He has benefited from being a white male with lots of privilege, he ticks every box of power in our society. He’s fair skinned, he’s well educated, he comes from a well respected acting dynasty, he’s able bodied, he’s heterosexual, he’s fathered children, he’s well spoken and successful. What he doesn’t realise is that he sits in the centre of this perceived power and he can’t imagine the view from anywhere else, as his seat and view has always been lovely so how can it not be for other people? Isn’t empathy and putting yourself in other people’s shoes the hallmark of a great actor?

As a POC you are constantly swinging between being invisible (bad service, ignored and overlooked for work promotions) and being considered a highly visible threat, especially when I’m in posh shops and get followed around by security on high alert as they feel I’m going to steal something. Even yesterday when trying to board my plane I was questioned if I really had speedy boarding, as if I could afford that privilege.

Segregation has gone and we have equal votes for women but I think it’s easier for people who haven’t walked in my shoes to understand racism through the prism of sexism. As women we can own property and even become PM but it would be naive and laughable to say sexism doesn’t exist and women and men are treated equally in the workplace and in society. This is how I feel about racism in the UK today, it’s insidious but undeniable and just as with sexism, it needs to be called out and addressed all the same.

Nathalie Emmanuel reveals that GOT ‘pulled her out of a slump’

The Woman in the Window is tipped to be one of the biggest films of 2020, here’s why…