1 Prepare the eggplant: Turn on the broiler and slide a rack 10-inches below the broiling element. Trim the stem and bottom from the eggplant and cut it into 1-inch pieces. Combine the eggplant and onion in a bowl and toss with salt, pepper, and 2 tablespoons of the olive oil.

4 Prepare the tomato sauce: In a large pot (big enough to hold the eggplant later), heat the remaining 2 tablespoons olive oil over medium-high heat. Add the garlic and celery and cook, stirring, for 1 minute.

Crush the whole tomatoes in a bowl using your hands or a potato masher until you have small, bite-sized pieces. Add both the tomatoes and the roasted eggplant mixture into the pan with the garlic and celery. Bring to a boil, then lower the heat, cover the pan, and simmer for 5 minutes.

5 Stir the raisins, vinegar, capers, and sugar into the sauce. Continue cooking for 5 minutes, or until the eggplant is very soft. Taste for seasoning and add more salt and vinegar, if you like. 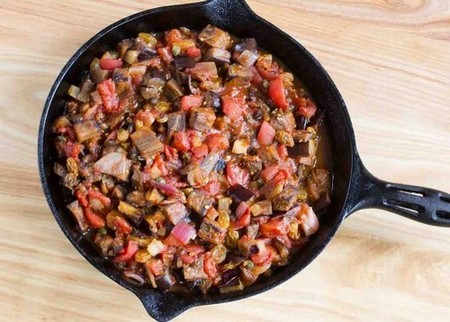 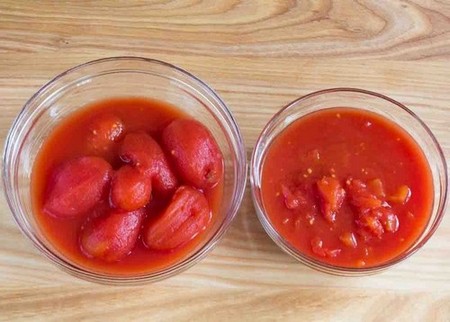 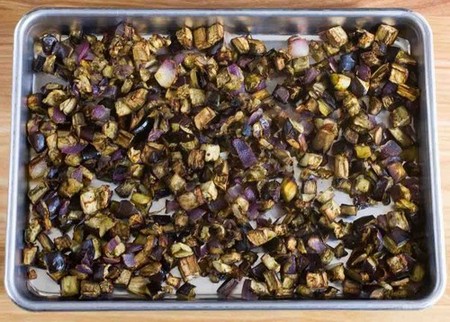 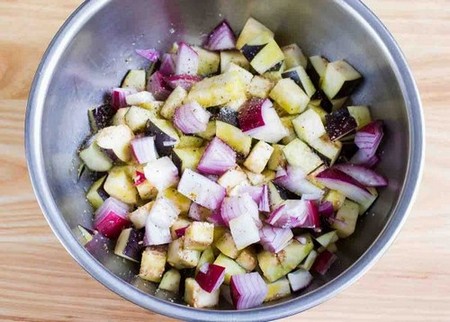 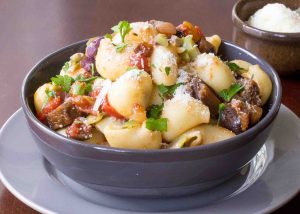 6 Cook the pasta: Bring a large pot of salted water to a boil. Add the pasta and let it cook, stirring once or twice, for 8 minutes, or until it is tender but still has some bite. Before you drain the pasta, use a heatproof measuring cup to scoop out roughly 1 cup of the water; set aside. Drain the pasta and return it to its cooking pot. Sprinkle with olive oil and toss gently.

7 Combine the pasta and sauce: Pour the eggplant sauce over the pasta, then add 1/2 cup of the pasta cooking water.. Place over low heat and stir until the sauce begins to coat the pasta. Add enough of the remaining cooking water to make a saucy mixture. Taste for seasoning and add more salt and vinegar, if you like.

8 Serve the pasta: Spoon the pasta and sauce into 4 shallow bowls. Sprinkle with Parmesan, olives, and parsley.