Witchcraft – which is, after all, the art of changing your own reality – has always been a form of resistance to authority. In 1968, the US-based activist group W.I.T.C.H (Women’s International Terrorist Conspiracy from Hell) was founded by feminists who believed that they should ally with a range of left-wing causes to bring about social change in the United States.

This group utilised the iconography of the witch, often making political protests dressed in the traditional black witches’ garb.

Once upon a time, witchcraft was secret. Once upon a time, people imagined that witches, if they existed at all, must be warty green-skinned women living in a shack somewhere, cackling over a cauldron.

Then, the internet arrived, and once upon a time faded into the fairy tale it always was.

Until 1951, in the United Kingdom, witchcraft was illegal. But very soon after that, modern witchcraft was born, and gained popularity incredibly quickly. 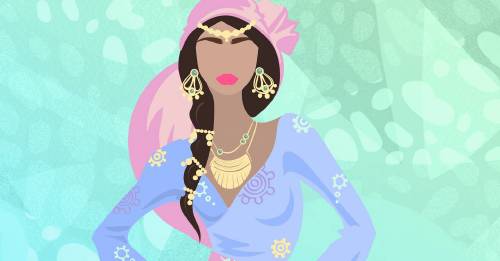 Historically, the witch was the powerful and yet persecuted outsider. She was persecuted because she had knowledge that challenged the status quo, and she maintained communion with gods and spirits outside the confines of the Church.

Witchcraft is a diverse movement that continues to evolve, and one of the places it’s currently evolving fastest is on Instagram. As a spiritual practice focused on empowerment, which reveres nature and honours kickass goddesses from a variety of cultures, there’s a lot that could be said to appeal to millennials, for whom climate change, feminism and having a voice in what feels like a politically dystopian world is ever more important.

Using hashtags such as #witchesofinstagram, modern witches share pictures of altars for various gods or intentions, tarot spreads, spells, astrological information and inspirational essays. But they also talk about using their magic, and power, in activism. #hexthepatriarchy is real.

It’s no accident that the surge of popularity of witchcraft comes at a time when far right political ideologies are becoming more and more popular. Doing spells, connecting with goddesses, learning about divination, healing and herbal cures provide young women – but, crucially, anyone – with a different path to enlightenment, focus, heightened self-esteem and, perhaps, a sense of control in chaotic times. Regardless of our own politics, witchcraft gives us agency and power.

In the twenty-first century, the internet has gifted us with greater power than ever before to reach others, exchange ideas, cast wide spells of inspiration and empowerment and organise ourselves against the structures that seek to disempower us. Like the man said, the medium is the message: in this case, the medium isn’t a middle aged woman with a headscarf, but a microblogging site that has removed the veil of secrecy from witchcraft forever.

Posting on and following #witchesofinstagram, modern witches can be visible, connect, interact, organise and have their voices heard like never before, remaking the world every day. This is a magic that our ancestors could only have dreamed of.