This has sparked online debate about the acceptable age to let your kids have their ears pierced. Confused over what the fuss is about? Us too.

Hilary Duff has been targeted by online trolls for piercing her daughter’s ears. The Younger actress posted a sweet photo to Instagram of her laughing with 8-month-old Banks, but instead of simply admiring the mother-daughter photo, people were quick to criticise the tiny stud in Banks’s ear.

According to the critics, Hilary’s daughter’s ear piercing is “child abuse” and put her in the firing line for inflicting “unnecessary pain”. Another wrote: “I can’t fathom why you would you think it’s okay to have your daughter’s ears pierced. Causing her a tremendous amount of pain and discomfort”. People have even gone as far to compare it to male circumcision. Hmm. Judging by Banks smiley face, she doesn’t look fussed at all.

Fortunately, fans have been quick to come to Hilary’s defence. One user wrote: “Parents have been doing this for years! It’s not painful and not a big deal so back off! Do what you will with your own child. Others hailed it “super cute” and questioned why it was “not ok for a mom to decide to pierce her daughter’s ears?”.

Hilary gave birth to Banks Violet Bair last Autumn with her fiance Matthew Koma. She is already a parent to 7-year-old year-old Luca who she shares with ex-husband Matt Comrie.

The way we see it, Banks won’t remember the very minor pain of getting her ears pierced and, even better, she won’t have to spend years bargaining with her parents to get them done (that struggle is REAL). Sounds like a win, win situation to us. 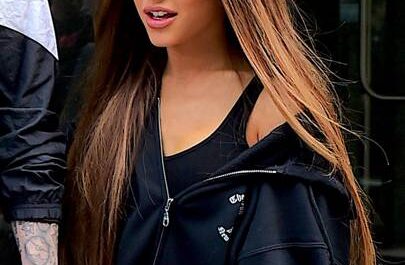