After Dyson released the Supersonic hair dryer and the Air Wrap Styler, it was only a matter of time until the beauty giant added a straightener to its array of hair tools – but the venture would mark new territory for the brand.

You see, unlike the existing collection of hair tools, a straightener wouldn’t be able to rely on air flow – Dyson’s area of expertise. It would need high heat control, plate technology and, if it was going to keep up with rivals’ cordless versions, a supercharged battery. But, as we all know, if anyone can rise to a challenge, it’s Dyson.

But as we all know, on paper doesn’t always translate to in practice. Corrale’s unprecedented technology gives rise to a lot of promises in terms of its performance, including a reduction of heat damage, quicker styling, and smoother results, so there’s a lot to live up to. Here, we put the new Corrale to the test…

The Corrale is sleek, lightweight and thoughtfully designed. It can be used cordless and corded, which is welcome news to anyone who has ever been stuck waiting for hours while their straighteners charge. The product comes with a display-style charging dock, as well as a magnetic charging cord, so you can choose how you charge. The Corrale is available in two colours (black and silver with pink accents), both as elegant as each other.

The last major breakthrough in hair straightener technology came with the introduction of ceramic plates in 2002, allowing smoother styling and considerably less damage. Now, the Corrale takes plates to a whole new level thanks to its flexible manganese copper alloy plates, allowing superior control and heat conduction. The plates are able to mould into shape, hugging the hair and providing greater control while preventing the side-splaying that occurs with traditional straighteners.

When strands escape out of the sides of traditional straighteners, you’re left with hair that need going over with the heat again, which exposes hair to more heat and, therefore, more damage.

Corrale has three heat options, 165, 185 and 210 degrees Celsius, catering to absolutely all hair types and allowing a higher degree of user control. However, the main point of difference is that the flexible plates mean that the Corrale requires far lower temperatures to deliver superior results. Even the curliest, coarsest hair can styled on a medium heat – something traditional straighteners would never be able to offer. 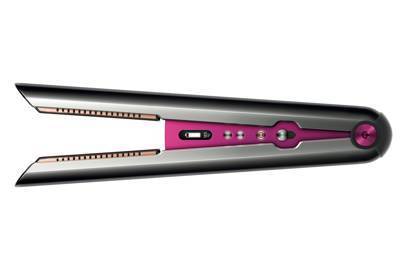 The four cell lithium-ion battery means that the Corrale provides 30 minutes of cordless styling – great for on the go touch ups – and charges fully in just 70 minutes, a marked improvement from other cordless straighteners on the market. What’s unique about the Corrale is that it can be used corded and cordless, so you can charge it while styling your hair at home, unplug it and take it with you on your adventures. Genius.

We witnessed the Corrale working its magic on a range of hair types – from fine, straight hair to coarse, 3B curls. The Corrale straightened fine hair on the lowest heat setting, cutting down styling time significantly with each section only needing one stroke, and smoothing the 3B curls impressively only needed the medium heat setting. Plus, because of the flexible plates, the Corrale is great for curling too as they don’t leave that dreaded kink.

The Dyson Corrale Sraightener, £399, is available from today at dyson.co.uk and in the Dyson Demo Store on Oxford Street.