Plus, with all fun cancelled for the foreseeable future; it feels as though being bored may become my default setting, like being stuck in the endlessly-repeating day of Russian Doll on Netflix.

Are you bored? I’m bored.

It’s only been a week of self-isolation, but the prospect of not seeing friends, daylight, the Jubilee Line….it’s BORING.

However, before you decide that life is as bad as quarantine without wifi, I have some good news for you.

Being bored is good for your brain.

I recently wrote a feature for the SS20 Issue of GLAMOUR in which I explored the neurological impact of Instagram. One of the surprising findings of my research was the fact that boredom came up time and time again. Almost every expert I spoke to had something to say about its significance.

The takeaway? Be bored. It’s good for you.

So, what does that actually mean? Well, the simple fact of the matter is that our brains thrive on being bored. Ever get some of your best ideas when you are bored? Ever feel more creative when doing nothing? That’s because we are allowing our brains to act on their own, unassisted and, crucially, un-stimulated by external factors.

There is a nifty neurological explanation for this. I spoke to cognitive neuroscientist Dr Caroline Leaf, who explains that being bored activates a pivotal network in your brain.

“It’s called the default mode network and it is vitally important for the brain,” she says, “When you are alone with your thoughts – you reboot your brain, you reactivate this network, it puts brain health back into the brain. This network never switches off but it requires you to spend this time disconnected from tech- to think deeply – to thrive.”

Ah, tech. You will notice that tech – particularly social media – is about to become the Big Bad here…

Dr Leaf goes on to show me a scan of a brain in the 1970s and one recently. The second looks like a tangled, confusing mess-it sort of looks like the place all the 500 hair bands I’ve lost over my lifetime have come to die. But why does a modern brain scan look so messy, compared to one in the 1970s?

“The main reason for this is that back then, we still spent a lot of time thinking- alone with our thoughts. We would read more, we would listen more, we would play and use our imagination more. You wouldn’t always need to have something in your hand- you’d just be sitting. With social media, that has disappeared.”

Baroness Susan Greenfield, one of our leading neurological scientists, thinks this is giving us more than ‘messy hair-band brain’- it is damaging us psychologically.

“The over-use of social media is having a profound psychiatric effect, “ she explains, “As children we used to play using our imaginations- we would make a box a fort- and this was important cognitively because you were driving the narrative, it was your story; you were in control. It was internalised to you. But now, external stimulation of these screens is driving how our brains work, it is not being internally motivated.”

Essentially, we need to take back control of our brains, and self-isolation may actually provide the perfect opportunity to build up a little brain health. However, I have a feeling that may prove an uphill struggle….

“I am on my phone every second now,” a friend messaged me last night, “Help!”
“How are you coping? I’ve been bingeing Instagram, I can’t help it” said another.

We are really bad at being bored, and part of that is down to our modern dependence on the instant gratification and cheap, easy entertainment that our phone offers.

The most flattering shapewear to shop right now

One researcher I speak to, Kathrin Karsay from KU Leuven University in Belgium, found that people surveyed in one of her studies, used social media “every spare second.” Tally this with your own life, and you’ll realise it’s true: waiting for the lift at work, waiting for food to cook, most of us even take our phones to the loo.

The tempting thing, in isolation, is to use our phones to stave off boredom- but stop! Remember that tangled mess of old hair bands in your brain! Try instead, to ease into the boredom. Take some time alone with your own thoughts, enjoy silence, and realise how good that can be for your neurological health. Treat this stage of boredom as a retreat for your brain- a brain spa, if you will.
If you need any more convincing, consider a study last year by three universities across Australia and Singapore, which proved boredom sparked increased productivity and creativity. Test subjects who were forced to do a ‘boring’ task (filling a bowl with coloured beads) later outperformed those who hadn’t, when doing a creative exercise. The boring bead job had strengthened their brain.

Sandi Mann, the author of The Upside of Downtime: Why Boredom is Good, agrees. His book defines boredom as: “a search for neural stimulation that isn’t satisfied” and: “If we can’t find that, our mind will create it.” It outlines how daydreaming can be advantageous for our brains and how beneficial boredom can be for our mental health; if we step away from the overstimulation of our screens – from inboxes to instagram- that can often trigger anxiety.

So, I’m trying to spend some time allowing my brain to ‘create’ and to daydream. I’ve been speaking to people, trying to find out how others are coping with isolation. One friend has decided to use this time to read more books- setting out to tackle those classics she never got around to reading. Another is trying to get into calming classical music, while a few more are being productive with their boredom- learning a language with an online course, tackling the piano, or even just mindfully colouring in.

This is all readily approved by Dr Leaf: “You don’t need to spend all day doing this” she says, “But you do need to spend frequent times during the course of your day in activating that default mode network.”

So, good luck with self-isolation folks. Use this downtime to your advantage and remember- if you feel bored, that just means you’re taking your brain to the gym for a work-out.

There’s a Link, According to This New Study

Ahh, so *this* is why our skin’s got spottier during lockdown 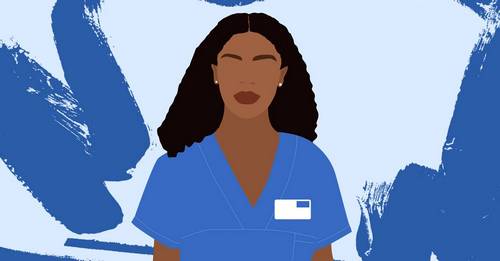 We love the NHS. But that doesn’t mean it’s not racist