In the mythology of Game of Thrones, Azor Ahai was a legendary hero that lived over five thousand years before the events that take place in the series. He fought against the darkness that lay over the world by forging Lightbringer, a flaming sword that he tempered with the blood of his beloved wife, whose soul merged with the sword, giving it its power.

Game of Thrones loves its prophecies, from the one about Cersei’s death, to the one Varys heard as a child, to the many inscrutable predictions of Melisandre.

However, there are two prophecies in Game of Thrones that may be more linked than we originally thought: the prophecy of Azor Ahai, and the prophecy given to Daenerys after the death of Khal Drogo.

The prophecy of Azor Ahai states:

“There will come a day after a long Summer when the stars bleed and the cold breath of darkness falls heavy on the world. In this dread hour a warrior shall draw from the fire a burning sword. And that sword shall be Lightbringer, the Red Sword of Heroes, and he who clasps it shall be Azor Ahai come again, and the darkness shall flee before him.” 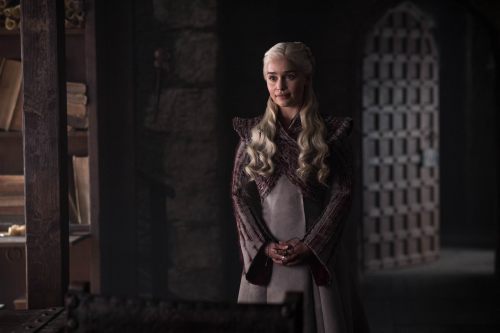 Melisandre elaborates on this prophecy by saying: “When the red star bleeds and the darkness gathers, Azor Ahai shall be born again amidst smoke and salt to wake dragons out of stone.”

“When the red star bleeds and the darkness gathers, Azor Ahai shall be born again amidst smoke and salt to wake dragons out of stone.”

The gist of the prophecy is that one day, during a time of great darkness, Azor Ahai will be born again, and together with Lightbringer, he will rid the world of that darkness once and for all. While fans have come up with numerous theories about which character on Game of Thrones may be Azor Ahai, one of the most popular theories is that it’s Jon Snow, who seems to fit most of the criteria for being the resurrected hero.

What does that have to do with Khal Drogo? Well, when Drogo died back in season one, Mirri Maz Duur gave Daenerys another prophecy, stating: “When the sun rises in the west and sets in the east. When the seas go dry and mountains blow in the wind like leaves. When your womb quickens again, and you bear a living child. Then he will return, and not before.”

At first glance, this doesn’t seem to have anything to do with the Azor Ahai prophecy, until you take into account the events of the season seven finale, during which Jon Snow and Daenerys consummate their attraction (during the same scene in which it’s revealed that she’s actually his aunt, in one of the show’s more awkward narrative choices). While Dany believes she can’t have children because of what Mirri Maz Duur told her, using the prophecies of a duplicitous blood witch as birth control seems a tad unreliable.

If Dany is pregnant with Jon Snow’s baby, the birth of her child may actually wind up fulfilling both prophecies. .. but only if Daenerys dies in the process. 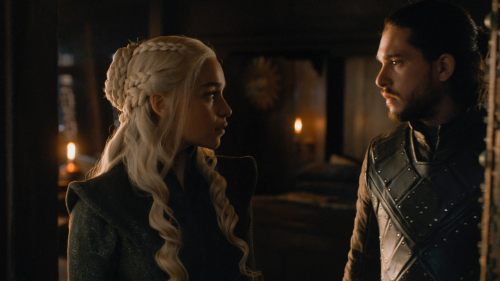 Let’s look at the Mirri Maz Duur prophecy first. The first half of her predictions could be fulfilled during the upcoming episodes in any number of ways – perhaps a dragon soars across the sky from the west to the east, blazing so brightly that it lights up the night; or the army of the dead crosses over a “dry” frozen sea; or a mountain gets destroyed by dragon fire, so that its ashes blow like leaves. And while the second half of the prophecy may indeed refer to Dany becoming pregnant with a living child, its ending may be (and probably is, given the source) intentionally misleading. It’s worded as though Drogo will return to the world of the living upon the birth of her child, but it could just as easily refer to Dany going to join him in the realm of the dead.

If Daenerys does die giving birth to her child with Jon, her death could also fulfill the Azor Ahai prophecy in an unexpected way. Historically, Lightbringer was a sword, but what if this time around, it’s. .. a baby?

We’ve been told that “Winter is coming” since the first episode of the show, so the “day after a long Summer” likely refers to the time when the Night King and his undead army (aka “the cold breath of darkness”) finally arrive in the Seven Kingdoms. And while the “stars bleed” portion of the prophecy is a little less clear, it is almost certainly meant to be taken figuratively, not literally.

Which begs the question: If the rest of the prophecy is figurative, why on earth would the part about a burning sword be literal?

“This would not only cement Jon as the second coming of Azor Ahai, but would also provide hope for the future in ‘Lightbringer,’ the child destined to bring lasting peace to Westeros.

Dany, who has proven herself impervious to fire, may in fact be the fire mentioned in the prophecy. When the “warrior” (Jon) draws the “burning sword” from the “fire” (Daenerys), that could be referring to him delivering their child, who is “burning” due to their Targaryen blood, and a “sword” because of their birth into a time of great conflict. This would not only cement Jon as the second coming of Azor Ahai, but would also provide hope for the future in “Lightbringer,” the child destined to bring lasting peace to Westeros.

And really, if Daenerys is going to die, why not take the prophecy one step further? What if she actually loses her fire immunity and gives it to her child, who will then be recovered from the flames after Dany burns to ash? Perhaps the “cold breath of darkness” refers to the ice breath of Viserion, which will be used to incinerate his former “mother,” leaving behind her fireproof offspring. Not only would that mean Jon would be plucking his “burning” baby out of a literal fire, but it would also mirror the fiery birth of Dany’s dragon “children” back in season one – a fire she entered in order to be with Drogo.

We don’t want Dany to die. The notion of Game of Thrones killing off one of its most powerful female characters in order to further a man’s heroic arc is far from ideal, but there would certainly be a tragic symmetry to it. After all, Azor Ahai had to kill his wife in order to create Lightbringer, and Jon’s mother died giving birth to him.

But if Queen Daenerys Stormborn of the House Targaryen, the First of Her Name, Queen of the Andals, the Rhoynar and the First Men, Lady of the Seven Kingdoms and Protector of the Realm, Lady of Dragonstone, Queen of Meereen, Khaleesi of the Great Grass Sea, the Unburnt, Breaker of Chains and Mother of Dragons is going to go, rest assured she’s going to make her exit in the most dramatic fashion possible. And if she can fulfill a couple of world-changing prophecies on her way out, so much the better.

Kit Harington Reveals His First Impression of Emilia Clarke, and Even the Iron Throne Is Melting

Kit Harington is the latest star on the cover of Esquire for its May 2019 issue, and boy does he look good. In addition to looking swoon-worthy in a series of sexy outfits (um, that blue suit though!), the 32-year-old actor (who famously plays Jon Snow on Game of Thrones) opened up about everything from what it was like meeting pal Emilia Clarke for the first time to how difficult it was saying goodbye to Jon Snow forever. Given that Kit is a huge prankster, the actor also revealed the best prank he ever pulled on his costar John Bradley.

After a much-anticipated wait, Game of Thrones finally returned for season eight on Sunday, and the premiere was even better than we hoped for. Not only does Jon return to Winterfell, but there was even an It’s Always Sunny in Philadelphia cameo! Yep, this might be the show’s biggest season yet! Check out what else Kit had to say ahead, then read his full Esquire interview here.

Following Game of Thrones’s epic return on Sunday night, HBO has since treated fans to behind the scenes content from the making of the show – and a LOT of hilarious viral content.

If you missed it, during the season 8 premiere, Jon Snow (Kit Harrington, if you’re a total newbie) shares a passionate kiss with his lover/aunt (yep, you read right) Daenerys Targaryen, AKA Emilia Clarke.

Kit is also married IRL to Rose Leslie, who was in Game of Thrones up until season 4, and Rose has a particularly close relationship with Emilia, which is where you can imagine things get a bit weird. Rose definitely watched that ep with a clenched fist, we’re calling it.

But Kit has now admitted it was “really odd” to kiss his “best friend” Emilia Clarke on screen because she’s such good friends with Rose, and there’s solid evidence, with HBO releasing footage of him GAGGING on-set following a sneaky kiss with Daenerys.

“Emilia and I had been best friends over a seven-year period and by the time we had to kiss it seemed really odd,” he told The Daily Mirror.

“Emilia, Rose and I are good friends, so even though you’re actors and it’s your job, there’s an element of weirdness when the three of us are having dinner and we had a kissing scene that day.”

Growing Up Colombian and Puerto Rican Which One Was I?