Vegetable Biryani is a bold and flavorful Indian rice dish with bell peppers, peas, carrots and potatoes in a spiced rice dish made with turmeric, garam masala and other warm spices.

We’re working through a list of our favorite Indian recipes including Indian Butter Chicken and Easy Chicken Tikka Masala and it felt only right the next recipe shared would be a biryani dish which is amazing served with Cucumber Raita.

Biryani has always been a recipe I’ve been intimidated to make even though it looks like it would be a recipe that’s easier to make than most Indian dishes. The rice is always so heavily flavored I worry about how long to cook it for and how the final combination of vegetables and rice will cook together so both are perfectly tender and soft at the same time.

When I started cooking with my family friend who is well versed in Indian cooking my first request was chicken biryani (coming soon). We discussed spices, I mentioned I’d only made biryani with a spice packet before, never mixing single spices together to put together that spicy, bold, flavorful rice on my own.

This biryani is easier than most, no whole spices being toasted and ground. No red curry paste or ginger garlic pastes are needed. The resulting flavors are incredibly delicious and addicting.

What to serve with vegetable biryani:

Most Indian recipes work well together, this dish is a bit spicy so a yogurt raita would be great to cool it off a little. Naan would also be a delicious side option as would other vegetarian Indian dishes like saag paneer or vegetable korma. 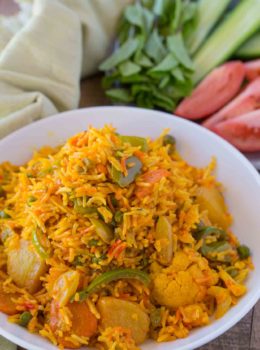 What kind of rice is used in vegetable biryani:

A classic biryani is made using basmati rice. This rice is thinner and longer than a traditional long grain rice.

How do you make biryani rice?

Why is biryani rice yellow?

The yellow coloring in the rice comes from the use of turmeric along with other spices. These spices are added into the dish before the uncooked rice is mixed in.

Vegetable Biryani is a bold and flavorful Indian rice dish with bell peppers, peas, carrots and potatoes in a spiced rice dish made with turmeric, garam masala and other warm spices. 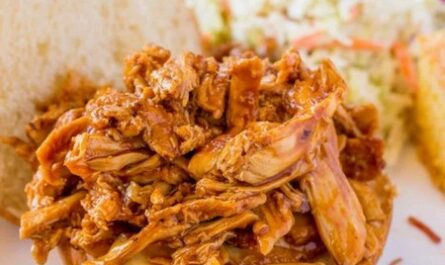 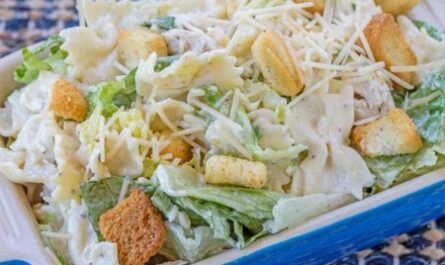