There’s a bunch of reasons why we would welcome cordless hair styling. Maybe you have fine hair, and any change in weather results in instant and unwanted frizz.

Or perhaps you’re a bit of a globetrotter and you are fed up of finding the right plug adapter, or worse, arriving at your destination to find that your heat styler doesn’t work in that country. Yep, there’s no denying that having a cordless hair styler would be a dream.

But that’s exactly what it’s been – a dream, with issues such as weight and battery life stunting any possibility of its creation. Until now, that is. Babyliss have just dropped the world’s first cordless straightener. So, does it live up to the hype?

My hair is not curly and not straight, meaning it’s default mode is wavey with a few ad hoc ringlets. It’s also fine, meaning that frizz is likely at all times. On the days I need to look presentable, I straighten my hair or use a wand to add beachy waves – both of which tend to last approximately three hours, so it would be great to be able to touch up on the go.

I’m skeptical about on-the-go electricals, namely because I think they’re going to be heavy and need charging every 30 seconds. Plus, I already have more chargers, wires and what-nots that I have plug sockets. So for a new device to make the cut, it would have to be major.

On first inspection, I’m pleasantly surprised. The 9000 is relatively lightweight, sleek and compact. Plus, it comes with a heat-proof cover and a safety feature that means it can’t accidentally turn on in your hand bag (which was my main concern). 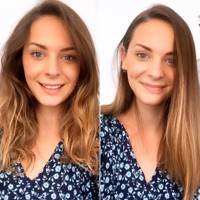 There’s three heat settings, 160°C, 180°C and 200°C, and is powered by a lithium-ion battery for lasting peak performance. A three-hour charge gives you 30 minutes of power at the highest heat. Which doesn’t seem like that long, but when you actually time how long it takes you to do your hair, you might realise that it gives you plenty of time for a full styling session and a couple of touch ups.

I began the trial with natural, air-dried hair, with kinks, curls and frizz galore. Within 5 minutes, my hair was smooth and silky. Not bad, not bad at all.

There’s definitely a bit of weighing up to do here – the 9000 delivers on sleek hair anywhere and it is lightweight, powerful and safe. But it’s also £250. If you straighten your hair regularly, and find yourself needing to touch up often, then I would really recommend it. If you’re an occasional straightener, then it probably doesn’t make sense.

How I Created a Clean Skincare Routine at CVS