The A-listers last worked together in the best-loved US sitcom, with Witherspoon playing another of Rachel’s spoilt sisters, Jill, and briefly dating Ross (fans may remember he tried to impress her with a slideshow on their first date. Classic Ross).

Now they’re starring in the new Apple TV ‘dramedy’, which was inspired by Top of the Morning, a book by CNN media reporter Brian Stelter about the rivalry of early morning TV shows.

Almost 20 years on from their stint on everyone’s favourite comedy, Friends, Jennifer Aniston and Reese Witherspoon are back together on the small screen as they team up for a new TV series, The Morning Show.

Aniston and Witherspoon play journalists on a breakfast television programme alongside an all-star cast including Steve Carell, Gugu Mbatha-Raw from Black Mirror and Informer’s Bel Powley, and is said to be an inside look at what it’s like to present an early morning TV show and what goes on behind the scenes. 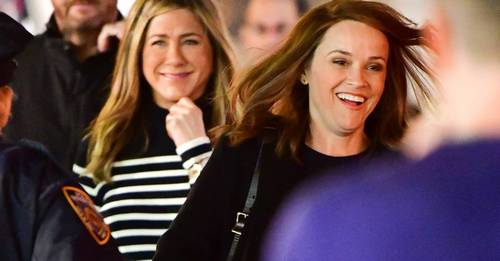 Getting us excited for the upcoming series, the new teaser trailer that’s been released features quotes from Aniston, Witherspoon and Carell sharing their thoughts on what it is to host a morning news programme with what feels like an intense tour around the empty studio.

Of course, Witherspoon is no stranger to the small screen having starred in two series of the dark comedy drama, Big Little Lies, based on the brilliant book by Liane Moriarty – so it’s no wonder Apple took part in a competitive auction to buy the rights for the new show from her production company, Hello Sunshine.

We’re betting they’re hoping to recreate the same success as BLL after it was revealed the new two-season series cost them a whopping $240 million, making it one of the most expensive TV deals in history – and they bought two other projects from the star too. Each series will feature 10 episodes and will be coming to the app this autumn. We’ve never been so keen for summer to end…

How this celeb-favourite vintage jacket label, is making sustainability cool