And as queer culture slowly fizzles into the mainstream becoming more widely accepted, and shows such as RuPaul’s Drag Race expose more and more people to modern drag, we’re all quickly becoming hooked on just what it takes to be a Queen.

Wigs. Nails. Fierce (and often hand-made) costumes. Perfect makeup. Working a day job before heading off to perform gigs until the early hours of the morning. There’s way more to drag than meets the eye.

But now it’s not just the US who get to have all the fun, because new Channel 4 show, Drag S.O.S, launches at the end of this month, and follows 5 queens from the Family Gorgeous (performers from the Manchester drag scene) as they travel around the country to make ordinary people from small towns over in drag and feel like the most confident versions of themselves.

Ahead of the long-awaited release, we caught up with one of the trusty hosts, Lill, who shared her tips on nailing your ultimate drag queen image… 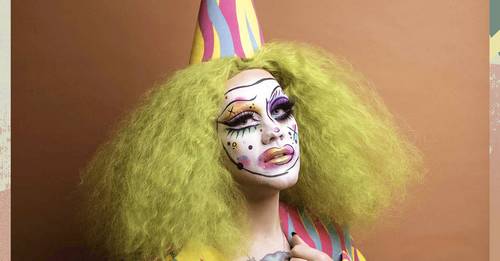 On…how much is too much?

“Put on a lot of makeup. When you think you’ve put too much, put more on. If you f*ck it up, f*ck it up some more and make it work. There are no rules so you’ve just got to get over it, I’d rather be out having fun with my friends.”

How do I get rid of my eyebrows?!

The answer? Elmer’s purple disappearing glue. Yep, the type of glue you used in primary school. Who knew? Applying thin layers of glue and brushing the hairs up with a spoolie will slowly, but surely, create a flat surface. And your self-esteem will drop considerably for a solid 20 minutes (speaking from experience).

“You can stick the eyebrows to the skin and then you lose the texture of the eyebrows. It’s the best thing to use because it’s non toxic and you can use it in layers” – Although we should also add Lill suggests you should just shave them off to save a LOT of time. And to restore your natural furry friends? You’re going to need a LOT of coconut oil…

“It drag is a process. You’ve got to go with the process.
“It’s not a mistake as such, but for it to look good, don’t be blending colours near to each other on the colour wheel.” Looks like greens and pinks on top of each other are a total no-go…

Yes – but no. If spending time with the queens has taught us anything, it’s that drag is expensive as you make it. Lill pointed out that a lot of the time you spend more money on drag than you make performing, but you can cut corners by switching out makeup essentials for cheaper alternatives. For example, using talcum powder over our trusty Laura Mercier Translucent Powder can give us the same base (especially handy when blocking your brows), and dropping our Urban Decay All Nighter in favour of hairspray to keep our makeup in place can make a respectable £20 difference.

The key to a good base is….

“Pretty obvious but I think lots of moisturiser before you put it all on. I use a Korean one, Cosrx. Someone recommended it to me and I love it, it smells like chip fat though*”

*that smell. Yep, it’s 92% snail secretion. But on a more serious note, the entire range of moisturisers have some major rave reviews, so they’re definitely worth keeping on your radar…

What holy grail product should we all be using?

While Lill says her favourite changes all the time (she gets into drag almost every day, she has plenty of time to experiment), at the moment she’s loving Maybelline’s SuperStay Matte Ink liquid lipstick in the shade Believer.

Apparently it stays on forever, which is essential for any budding drag queen that will usually keep their face on until the early AM – and at £10, we’re sold.

Most queens you meet are almost *certainly* have a tonne of Kryolan products in their beauty arsenal, too. Their TV Paint Sticks (often used in stage productions and on TV, hence the name) offer thick, full coverage that allows not only staying power, but can cover ANYTHING. Beards, included.

And quite frankly, if this stunning lot don’t convince you to stay up until 2am watching YouTube tutorials to level up your makeup game, nothing can.