As the name implies, it’s part towel and part bikini. The seemingly versatile piece can be worn lying down when sunbathing and doubles as cover-up, so that you don’t have to tote a bulky beach towel around town.

From denim briefs to fanny pack sandals, we thought we’d seen it all when it comes to strange summer trends. But then we came across the “Towelkini,” a swimsuit design that’s generating a ton of buzz this season.

While the Towelkini seems somewhat practical (albeit ridiculous-looking), it isn’t exactly an all-in-one product. Unless you’re cool with beach nudity, you’ll need to wear something underneath it to cover your backside. The cover-up is intended to be worn over a swimsuit, with holes cut for the arms, legs and neck, as well as a larger opening over the stomach or back. (The piece is reversible, so either way you’d be exposed.)

New York-based conceptual designer Aria McManus originally designed the product for an SPF-themed exhibit at Special Special, a design store in New York City. Though it wasn’t initially intended to be sold to consumers, the look was such a social media sensation that it’s now available online – and almost sold out. You can purchase one for just shy of $200 or pre-order a special edition Towelkini Mini for $80. Both sizes come in three colorways: green, yellow, and pink.

McManus is clearly aware of its absurdity and maintains a good sense of humor about the whole thing, as the tagline of the Towelkini reads:

“Melding the two essentials for all things beach, no need to carry a cumbersome towel and an easy to lose swimsuit – here they come as one, materialized as ideal. Keep the baes at bay, have all your haters throw in the towel when they lay eyes on you in this. Put the OW in towel, make them wish they were the sun of your beach. Follow suit, make this the one piece you get laid on the beach in.”

One thing is certain: There’s no denying the Towelkini will turn heads. 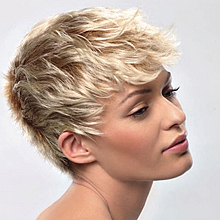 In the new season, slanting bangs and a hairdo of “spikelets” will become fashionable

This wardrobe staple is killing the planet

14 Supersexy Heels That Are So Hot, No One Will Even Be Looking at Your Outfit