It’s just under 12 months since Jodie Comer burst onto our screens – and into global pop-culture consciousness – as Killing Eve’s super-assassin, Villanelle.

The one-woman slaying machine with a Net-A-Porter wardrobe, sexy AF Russian accent and spicy chemistry – both sexual and murderous – with the fellow lead Eve (played by Sandra Oh) made for TV as addictive as Pringles.

But most importantly, the character of Villanelle – despite drawing much of her power from some pretty gruesome acts – has, in the hands of Jodie, become one of the most empowering women ever seen on screen.

Jodie Comer became an international star for her portrayal of psychopathic assassin Villanelle in BBC’s Killing Eve – a long way from her pre-fame shifts on the Tesco checkout. As the second series of the hit show airs, Jodie talks to GLAMOUR’s Josh Smith about dealing with fame, and how she slayed her own teenage insecurities to put the sass into assassin

Cue rave reviews for the 25-year-old, celebrity fans including Anne Hathaway, and a BAFTA TV Award. All of which is even more impressive considering Jodie had zero formal training, and some unfortunate GCSE Drama results. “I got an A* in my practical drama and I got a U in my written,” she laughs, in her thick Scouse twang. “I think my drama teacher made an example of me. You know people who would go home, do their homework, revise? It wasn’t my vibe.”

In fact, Jodie only started acting when her drama teacher put her forward for a BBC Radio 4 play, at the age of 12. Around this time she was expelled from a burgeoning girl group for failing to commit to rehearsals.

After hearing Jodie’s rendition of Jamelia’s Superstar during our GLAMOUR shoot, I reckon the band members didn’t know a good thing when they saw it. But that setback didn’t affect Jodie’s career, and she went on to make her TV debut at 15 with guest roles in The Royal and Holby City, along with a stint ‘werking’ the Tesco checkouts, of course.

“I used to have a part time job and the woman the boss hated me,” Jodie recalls. “It was Tesco, I worked on the checkout – she just proper had it in for me. I think it was because I was hungover! I had the 10am-4pm shift on the Saturday and then the Sunday 10-4,” she laughs. 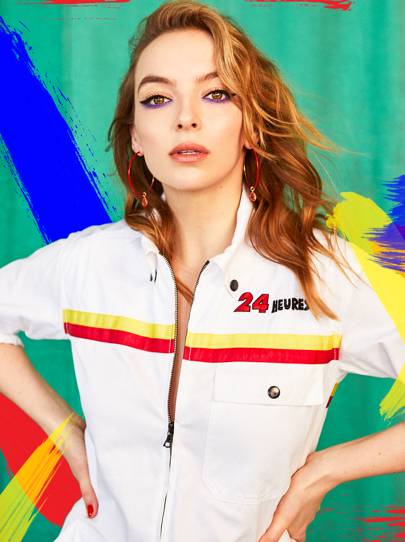 But thanks to her star turn as public enemy No1 – AKA the mistress in BBC’s 2015 hit Doctor Foster, she was able to permanently swap her Tesco uniform for red-carpet clobber. And then the *real* big break came at the 2017 BAFTA Awards, when she plucked up the courage (fueled by alcohol) to introduce herself to Fleabag herself, Phoebe Waller Bridge – the writer and producer of Killing Eve.

Despite her epic CV, Jodie remains – à la J-Lo – Jodie from the block. Between filming she still lives at home in Liverpool with her parents (her mother works for Merseytravel and her father is a sports massage therapist for Everton FC), and her younger brother Charlie.

Her friends and family have remained her security blanket throughout the past two years. “My best mate Liv in particular has been by my side. She knows everything about me,” Jodie says, citing a friendship that began at St. Julie’s Catholic High School in Liverpool, where she also counted Olympian Katarina Johnson-Thompson as a close pal. “We’ve got a girls’ group chat,” says Jodie. “It’s called ‘Hoes in Different Area Codes’ because we are never in the same place at the same time… so that’s always very lively.”

As a very ‘lively’ Jodie continues, it’s evident that just like Villanelle, you never know what she’s going to say next. “WhatsApp’s got us all by the balls, though! It’s like these are all private chats, but are they though?” Jodie questions before asking me, seriously: “Do you cover your webcam with a sticker? I’m so paranoid! I always have a sticker over it. My first one was an alien but if you peel a sticker off too many times, you can’t use them anymore. So now I have a pink heart that says ‘ladies’ on it.” Jodie has taken tips from Eve’s MI5 handbook, then.

Sisterhood both on and off screen has clearly been a source of comfort to Jodie as she’s navigated her meteoric rise. And, for all the hype, she has battled the same insecurities we have all faced. “In my late teens, I was so insecure about my body. I had a really unhealthy obsession with being thin,” Jodie confides as we wade into the charged topic of body image. “It’s something I struggle to speak about because I can’t really remember it. You know when you have a moment in life where it’s a total blur?

“When I look back at the time, I really lost interest in my acting because I was so obsessed with how I looked. I don’t remember wanting to go to auditions or being passionate about doing it. It’s so hard when you’re a teen. We used to have Piczo and people would have pages of ‘rate the girl’ and they’d have a picture of one girl and a picture of the other and there would be a comment box and you’d have to pick which girl was the fittest. Isn’t that disgusting? It blows my mind.”

However, after witnessing Jodie serve angles even Tyra Banks would be proud of on her GLAMOUR cover shoot, it’s clear that nowadays she’s found her confidence. “I’m extremely lucky that isn’t a thing for me anymore,” she says. “Now I want to feel strong and healthy. To do what I do you need to have stamina and you have so much time in your own head that you really have to. It’s like how people play instruments. Your body is your instrument.”

Jodie’s newly honed zero-BS approach to life is a handy tool when you have Hollywood knocking on your door – she’s currently filming her first feature film Tough Guy, opposite Ryan Reynolds. “When I was younger, I was very aware of how I looked and as I got older, I was like. ‘I am not a model, I’m an actress!’ I was succumbing less to the pressures of that kind of world, because I much preferred seeing characters who looked like sh*t or don’t care about it,” she says.

“When I put makeup on, I automatically become very aware of what I look like. The reason you don’t get a part isn’t solely because of your talent, there’s so many other factors, and as soon as you accept that and let it go, the better it is for you to move on and go to the next thing.”

She continues: “When you’re going through your teens and early 20s, everyone is playing games with each other. No one just says how they feel. That’s what I love about Phoebe – she’s so honest and when you’re around someone like that it’s so infectious and attractive when someone says what they feel, and they stand by it. That’s a good quality to have.”

With such women as Phoebe and Sandra at the centre of Killing Eve, the show isn’t just a gripping drama with a side helping of comedy and frothy fashion, it also represents changing attitudes in TV, which are moving towards putting powerful females in lead roles. But as Jodie herself shows, there is as much power in showing your emotions as in wielding an assassin’s knife.

“These women and characters are complex,” she says. “For an actress to play those roles is exciting and challenging and should be available to everyone. It’s the ‘strong’ thing that gets misinterpreted, as actually sometimes there is a strength in being quite vulnerable.”

What is the ultimate lesson Jodie has taken from the show about womanhood? “Freedom,” she says without hesitation. “These women are doing whatever the f*ck they want to do without consequence – within reason. It’s hard because I know Villanelle is a bad person, but there’s also something so free in her as she does what she wants to do and stands by it. Take away the killing people, just doing something and standing by it and not apologising for anything, that’s what I’ve learnt through these women. Neither character is black or white, good or bad. There’s times when you’re on Villanelle’s side and times when you go, ‘Oh that wasn’t a great move.’”

However, while roles for strong women – flaws and all – are becoming more common, I wonder if she still has to deal with everyday sexism? “Within everyday sexism, it’s hard – there’s the obvious things where you go into an audition room and it’s not very welcoming or you’re met with a certain attitude,” she says.

“But ultimately, I hate people calling me names! You know when someone’s scooting past you on the train and there’s a touch or a name like, ‘Hey darlin!’ I’m like, ‘Urrrgghh! Dude, put it away. Put it on the shelf!’ I’ve just been really lucky with who I’ve been surrounded with, like Sandra, Phoebe and Fiona Shaw, her Killing Eve co-star. But even though the show is fronted by women, there are so many men behind it who champion it. It’s always important to not forget that.” 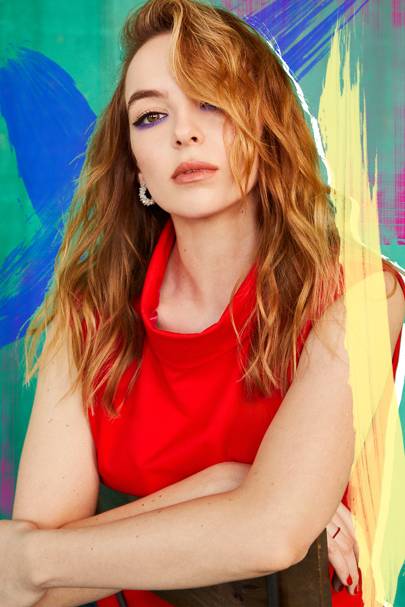 Two other valuable lessons from filming Killing Eve that Jodie won’t forget in a hurry are to chew properly and to possibly invest in some laxatives. “I had a really terrifying moment this series,” Jodie tells me, as my mind whirls with images of potential stunt injuries.

“For one scene I had to eat pasta all day for nine hours and I literally didn’t go to the toilet for two weeks,” she says. “It was the most excruciating pain I’ve been in. It was thick tagliatelle. It was my close up and it slipped down the back of my throat and was stuck,” she reenacts the scene with her hands around her throat.
“I full on couldn’t breathe and the actor in front of me thought I was making a really weird acting face, but I couldn’t breathe. The medic had to come in and I was crying. I loved the fact that of all the things that could have killed Villanelle, it was pasta. That was terrifying. We have a laugh about it now because I’m alive and kicking.” 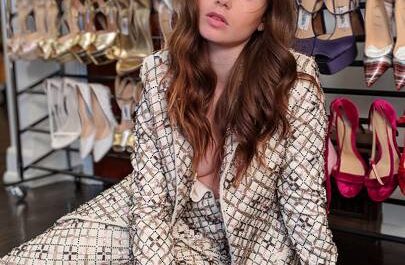 Meryl Streep Trolled Her For Being Short, but Just How Tall Is Reese Witherspoon?