Everyone seems to be going for the chop at the moment. Yep, thebob hairstyle is officially back and what better time to sweep the hair off the back of your neck than in the lead-up to summer, when it’s set to get hot and humid?

That said, it is a pretty baller move if you’re wedded to your strands and like the comfort of a little more length. Enter, the collarbone bob, a clavicle-skimming, choppy, laid back style that’s proving a hit with Hollywood’s elite.

Just ask Rose Byrne, Reese Witherspoon, Brie Larson and Julia Roberts, all of whom have recently joined long-term alumni Alexa Chung and made the cut. I asked celebrity hair stylist, Harry Josh (the man behind Rose Byrne’s utterly sleek, champagne blonde rendition), what we need to know before we take the plunge.

Why would we choose this style over the classic bob?

“A bob sits above the shoulders, this sits on the shoulders, so it’s a safety measure because you can still pull it back into a ponytail – it might be a short ponytail but you still have that ability. This style gives people the freedom of shorter hair, while still being able to do what they want with longer hair.

If you go all the way into the bob category, you can’t be as flexible, because it’s usually cut right to the nape of your neck. So, the reinvention here is a collarbone haircut that’s reminiscent of a grown-out bob. It allows for the versatility of a slightly longer haircut but still has the impact of a bob.”

So, what makes this style more modern than previous iterations?

“It’s a little longer and it has a couple more layers. The ends are very texturised so they’re softer and wispier which creates sex appeal instead of the rigid appearance of a stiff, Anna Wintour-style.”

Why is it a good style for summer and why is it trending now?

“I’m actually anti super-short hair for summer because when it’s hot, girls with long hair have an easier time throwing it up. But really, what’s making this haircut more topical now, is it’s a pendulum shift. All the girls who grew out their hair because they wanted it long are now cutting it short, then they’ll grow it back out and in three years time we’ll be talking about this again because everyone will want to cut their hair short again. It’s really just a matter of the pendulum shifting from one way to the other – that’s just human nature. So, it’s less about seasons and more about time for a change.”

What should people be aware of before getting this cut?

“Just because it’s shorter, doesn’t make it easier. There’s still going to be styling involved. It just takes a learning curve. But once you have it down, it should take you the same amount of time as your old routine did.”

What are the ultimate styling products to achieve this look?

“It will depend on your hair type. If you’ve got baby fine hair and you crave volume, what you’re going to need is going to be very different from the girls with thick wavy hair. The most common thing for thicker haired girls to use is something that will add a bit of weight and control it – balms, creams, anti-frizzers are of these are great to use so it doesn’t pouff up too much.

On the opposite end of the spectrum, if you’re someone with finer hair, who wants volume, then mousse is going to be your best friend because it’s going to give your hair just that light amount of product that will hold a nice shape and never get crunchy or crispy.”

How to style it?

The trick is to make it a bit messy. Too slick and stern and you risk looking like a mushroom. Instead, texture is everything. Styling wise, you’re not off the hook. But, try spritzing through a salt spray, let it mostly dry naturally, then finish off with some strategic tonging to achieve the sexy, nonchalant finish that collarbone bob has going for it. Or flip your middle parting the other way and try an ear tuck (like Rose) for an off-duty vibe that still looks sleek. 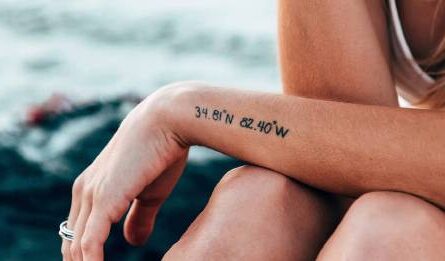 Want to know how much tattoo removal hurts? This is exactly what it feels like…

The correspondent of SE checked the effectiveness of photoepilation