Hours after this photo was taken, Lee went into labor. The next day, she gave birth to a healthy, cherubic baby boy. Her hair extensions, glued in for the shoot, held fast through the duration of her labor.

Postpartum, Lee had to ask the attending nurses for rubbing alcohol so she could finally remove the wefts, made by – are you ready for this – a company called American Dream (it’s British). Later, she emailed me a photo of three, frizzy, soggy sheets of hair stuck to a cream-coloured wall, next to a baby-pink hospital water jug.

The most stunning people in the US right now are those who use their strength and grit to create, to challenge, to say no, to embrace yes. For their July issue, Allure spoke to journalists, athletes, actors, and political activists about the beauty of seizing, and boldly acting on, our power. You can check out all the interviews in our America the Beautiful series right here.

Lee is very funny. So funny that she has a habit of guesting on popular television shows for handfuls of episodes, and then accidentally becoming the most memorable character in the series arc – Soojin in Girls, Homeless Heidi in High Maintenance. 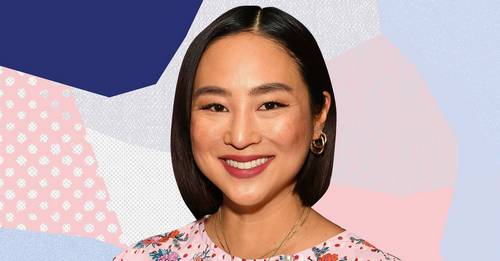 This year she appeared alongside friend Natasha Lyonne in Netflix’s Russian Doll, a surreal dark comedy about a woman (Lyonne) who keeps dying in freak accidents, only to return to the same moment at the same party. If you have seen it, the first thing you remember is Greta Lee, and the second thing you remember is “Sweet birthday babyyyyyyy,” and the third thing you remember is her perfect cerulean eyeliner, which wings out from the corner of her eye, pivots back, and underlines her eyebrows.

Right now, she’s co-writing KTown, an HBO series in development about a Korean-American crime family in Los Angeles that she cannot really talk about because it’s in its very early stages. Two things you can know: 1) Lee would play Yumi Kang, a “Brentwood Barbie” who sounds like the spiritual successor to her Girls character. 2) It would be the first show on HBO, or any cable network, for that matter, to revolve around Asian-American characters.

Right right now, she is telling me how she feels about the concept of “American beauty,” which, to be completely honest, is not a vibe she identifies with. “I certainly grew up feeling the opposite of that,” she says. “I was like a regular suburban kid who was desperate to look like Jennifer Aniston. I got the Rachel, and obviously, I looked very different and I was genuinely perplexed and angry over why it wasn’t translating.”

Then again, Lee didn’t consider herself a Korean beauty, either. “There’s a very set standard for what women are expected to look like in South Korea where Lee’s parents were born. And it’s even more, I think, restraining and prescriptive than in America. I didn’t fit into that, either, so it kind of just felt like, well, I’m super tan and I’m not cricket-sized like everyone else in Korea. I’m somewhere in between this American ideal and the Korean ideal, so I think that sort of kicked me in the butt and made me figure out my own space.”

“Most of it is realising as you get older that there’s no pageant that you’re trying to win, you know? It’s an active fight against this messaging that we’ve been hit over the head with since we were really young, that you were supposed to be Miss America. I feel like as an adult you realise that that’s fake news. That is not a worthwhile cause, and it’s OK. I do wish, as a kid, I could have learned that faster.”

Up until this photo was taken, my editors and I were quietly anxious that baby Lee would try to make an early escape and we’d have to call off the shoot. But the shot was got: a languid Lee at her most pregnant, draped in crimson. I tell her that it reminds me of this one bizarre portrait of Nancy Reagan, wherein the former first lady is wearing cheek-to-toe red, sprawled on a couch in her Bel Air mansion, hugging a pillow embroidered with her husband’s initials.

“You know me,” Lee says with a laugh. “Greta Lee: the Nancy Reagan of my generation.”

How well do you really know your skin… 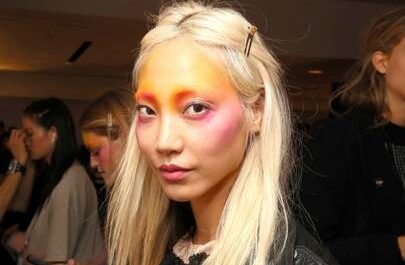