In a heartfelt acceptance speech, Lopez recounted her career through tears. She recalled her childhood growing up in the Bronx and how far she’s come since, mentioning the various designers who influenced her sense of style over the years.

Jennifer Lopez has long been considered a fashion icon, but her recent award officially recognizes her as one. Last night, the 49-year-old singer and actress accepted the final and most prestigious honor of the night, at the CFDA Fashion Awards: the Fashion Icon Award.

“We lost two (great) artists this year, Kevyn Aucoin and Oribe, who helped turn me from an around-the-way girl,” she said tearfully. “I said I wouldn’t cry. Together we created so many iconic looks, and I’m forever grateful. And tonight, I’m dedicating this award to them.”

Jennifer Lopez gets visibly emotional as she dedicated her #CFDAAwards trophy to the late icons Kevyn Aucoin and Oribe Canales pic.twitter.com/e20xOvW6Oa

She also thanked a number of fashion designers for accepting her curvier figure in an era of supermodel-thin standards. “Sitting in the design rooms of Oscar de la Renta, Versace, Dolce and Gabbana, Gucci and so many of you guys here tonight, people who designed and allowed me to get into their designs (with) curves like me. To say I was like a kid in a candy store was an understatement. And slowly, as curves began to be embraced, the girl who wanted to combine street style with couture began to blossom, and I’m grateful to all of you for that.”

JLo stunned in a bright orange two-piece Ralph Lauren ensemble, with her jaw-dropping abs on full display. The performer has been very open about her rigorous diet and fitness routine in the past, and clearly, it’s working wonders for her. Lopez paired her look with a sleek pony courtesy of  Color Wow Global Creative Director Chris Appleton, who used Color Wow products and hidden crown slip-in extensions to create it.

Past recipients of the award include Lady Gaga, Rihanna, and Kate Moss. 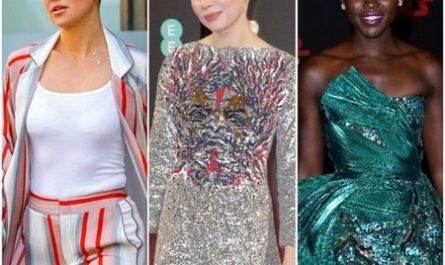 This Parisian ‘It’ bag is taking Instagram by storm