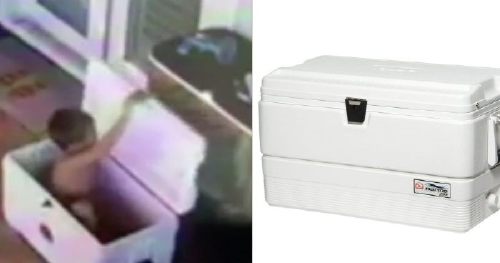 Igloo is voluntarily recalling all of its coolers with latch locks after a 5-year-old boy became trapped inside such a cooler during a game of hide-and-seek. In a video captured by a home security camera, Nicholas Wanes can be seen climbing into a 72-quart Igloo Marine Elite cooler, and once he closes the lid on top of himself, the latch closes, causing him to be unable to open the lid from the inside. After realizing he was stuck, Nicholas started screaming, and his parents ran outside, which is when his dad, Rob, lifted the cooler lid and found him curled up inside it.

After the Wanes family and WSVN both reached out to Igloo, the company released a statement in addition to its voluntary recall. “We are very sorry for the scare this incident must have caused the child and his family, and very happy no one was injured. We have contacted the family to express our apologies and communicate the following actions we have already taken.”

The cooler models included in the recall are as follows:

Igloo’s recall reads: “It is possible that the stainless-steel latch could inadvertently close where a person could potentially become locked inside. We are working closely with our distributors to send customers a free latch-replacement kit that you can use to easily and safely switch out the current latch. If you haven’t received a kit, you can contact us toll free at 1(866)-509-3503.”

18 Books Becoming Movies That You Need to Read This Summer

Strengthen Your Muscles With This Full-Body Workout