The model and jewellery designer has since posted a string of images and captions on her Instagram clearly telling her nearly one million followers that she isn’t after any sympathy with this news.

In her first Instagram post, Slick shouted out everyone who was going through chemotherapy with the hashtag #atleastimalreadybald. The post following her announcement was a picture of her son, Sapphir with the caption of few words, yet powerful in rhetoric, ‘stop treating me like I’m a victim’.

The post after that was an image of her at one of Rihanna’s Savage x Fenty lingerie show where she continued to emphasise her point in the accompanying caption, stating ‘I thought I told ya’ll I’m not no victim’. 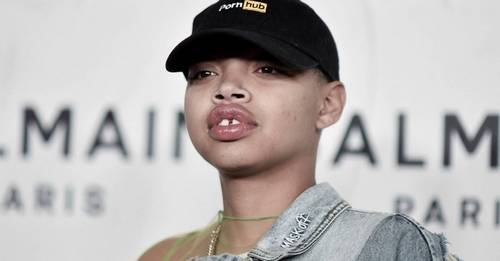 Despite not intending to gain sympathy, she did receive masses of support in her comments section. Words of love and encouragement came from people in the industry such as Oscar-nominated actress and star of TV show Empire, Taraji P. Henson and actress Lala Anthony, and of course amongst a sea of supportive comments from Slick Woods fans.

Slick came into the forefront of popular culture as the muse and front woman of Rihanna’s various campaigns. Firstly with cult beauty brand, Fenty Beauty and now with Savage x Fenty (where a heavily pregnant Slick went into labour at the show) – and she’s become a person in pop culture we have loved ever since.

Whilst none of the specific details have been revealed, such as when she started getting treatment, and the type of cancer, what we do know is that Slick is continuing to keep a social presence on Instagram by posting throughout the chemotherapy treatment that she’s currently receiving.

We wish her all the best.

Stormzy, Ed Sheeran, and Burna Boy’s New Song “Own It” Slaps So Hard, We Have It on Repeat

With Stormzy, Ed Sheeran, and Burna Boy collaborating on their new track, “Own It,” you already know it’s a banger. On Thursday, Nov. 21, Stormzy gave us a preview of his anticipated new album Heavy Is The Head by sharing the music video of “Own It” on his official Youtube channel.

Stromzy, Ed Sheeran, and Burna Boy make a dream team on this song. Stormzy offers some strong bars, while Sheeran supplies the melody, and Burna Boy keeps the song grounded with a smooth base. “Own It” is superuplifting and upbeat – the perfect song for getting in your Friday feels and pumped for the weekend. “Own It” speaks about a woman who is owning her confidence, and the man who observes her is in awe of her presence.

This really has been Burna Boy’s year with his fourth album African Giant (2019) being the unofficial hot-girl soundtrack of Summer 2019. It’s also been nominated for a Grammy under the “Best World Music” category. Sheeran is, of course, a seasoned virtuoso ever since his official industry debut in 2011. Stormzy has also been killing it on all fronts, from his shaping of the grime scene to his philanthropic efforts. It’s no surprise that Stormzy’s new album Heavy Is The Head is set for release the day after the UK general election – Dec. 13, 2019.