Cat-lovers, prepare to rebook your wedding photo shoots. Marianna Zampieri, an Italian photographer and fellow kitty-enthusiast, has been taking gorgeous postnuptials shots that will make you want your very own.

“I’ve always been a cat-lover, and my passion for photography came out when I adopted my cat Arthur five years ago and I wanted to show his beauty worldwide. I worked on a couple of projects where cats were always protagonists: Passions, C-AT Work, and my ongoing project Cats in Venice. I also started to do private shooting with cats for all the people who wanted to have some photos with their furry babies in the intimacy of their homes.”

The idea of creating postwedding photo shoots with cats came to Zampieri when, in April of last year, she got married. Having organized a very intimate ceremony (they married with only their parents and witnesses) without the knowledge of everyone, there was not even a photographer, and so she and her partner arranged a shoot later with a series of self-portraits. However, a special someone simply had to be included in their big moment.

“I would not have endured the idea that in the pictures of the most important day of my life, there was not Arthur, my beloved cat. So I took a series of photos with him to capture that moment. In the meantime, a couple of friends, who I had already photographed, had contacted me just for the same reason: they were close to marriage and they wanted so much for their beloved three cats to take part in that great event. They knew, however, that it would be very difficult to be able to make beautiful photographs the day of the wedding: too much emotion, too much confusion, and too many people present for cats.” 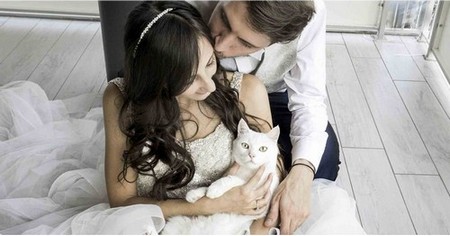 The group decided to schedule a shoot the week after the wedding so the cats would be comfortable – and it gave the couple a chance to dress up in their wedding best all over again!

“With cats, you can never know who will want to be photographed! Luckily, on this occasion, all three cats participated with pleasure, as if they had sensed that the occasion was important, each in its own way, with its character. In particular, Perla, the beautiful white cat, had a lot of fun with the various layers of tulle of the wedding dress, so that we found her always lying on the long train.”

10 Tips For Raising a Smart Child