Drinking three cups coffee will not harm your heart, and may even reduce your risks of developing an abnormal rhythm, new research suggests.

Doctors have long cautioned that caffeine consumption might be dangerous for those with overly-strained hearts, by making them pump harder and tire out faster.

But, the new study from the American College of Cardiology found that the three daily cups can lower palpitation risks by 13 percent, reducing the risk of a heart attack or stroke in turn – but caffeinated energy drinks still pose a risk.

Coffee remains controversial – with California declaring it a carcinogen last month – but the new study is the latest piece of evidence to suggest that up to six cups a day are safe, and the health benefits outweigh its risks. 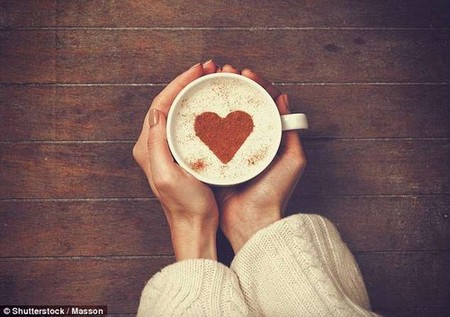 A study of more than 340,000 people found evidence that both tea and coffee may  protect against common heart rhythm disturbances.

Healthy antioxidants in caffeine are probably behind the phenomenon, said cardiologist Dr Peter Kistler, who led the new study and is director of the Alfred Hospital and Baker Heart and Diabetes Institute.

Historically, it has been commonly assumed that the stimulant effect of caffeine in coffee can cause the heart to beat faster – potentially causing illness.

‘There is a public perception – often based on anecdotal experience – that caffeine is a common acute trigger for heart rhythm problems,’ said Dr Kistler.

‘Our extensive review of the medical literature suggests this is not the case.’

The life-threatening conditions occur in each of the heart’s two upper and lower chambers, respectively.

Dr Kistler said that caffeine blocks a molecule that fuels AF – the most common heart beat problem which can progress to heart failure.

The arrhythmia disorder affects between 2.7 and 6.1 million people in the US.

In AF, the heart pumps blood less efficiently around the body because it is contracting and relaxing irregularly or too quickly.

This means that the blood does not have a chance to properly fill the chambers of the heart, where the muscle should smoothly and evenly push it out to the rest of the body.

This can also cause blood to back up in the vessels and the lungs to become bogged down with fluid. These factors together can potentially lead to a stroke-causing clot.

VAs, on the other hand, are an erratic, disorganized firing of impulses from the organ’s ventricles and are the most common cause of sudden cardiac death.

Former UK Prime Minister Tony Blair was successfully treated for AF while he was prime minister. He blamed his heart problems on too much strong coffee during an EU conference and doctors advised him to cut back.

Now, Dr Kistler and his colleagues suggest that Blair’s doctors may have been wrong and coffee may have had nothing to do with it.

HOW IS COFFEE GOOD FOR YOU?

The study authors acknowledged that many doctors advise patients with AF or VAs to avoid coffee, tea and other caffeinated beverages.

But their review published in JACC: Clinical Electrophysiology said that coffee and tea are safe and can cut the frequency of irregular heartbeats.

The researchers found multiple studies investigating the link have consistently shown a decrease in AF with an increase in consumption of caffeine.

Pooling data from 115,993 showed a 13 percent reduction in risk among regular coffee drinkers.

A further ‘meta-analysis’ of 228,465 participants found AF frequency fell by six percent in those with higher intake of caffeine.

Dr Kistler said arrhythmias are abnormal heart rhythms that cause the organ to beat too fast, slow or unevenly.

Some may be harmless or even go unnoticed in patients but others can increase risk for sudden heart attack or stroke.

Dr Kistler said a single cup of coffee contains about 95mg of caffeine and acts as a stimulant to the central nervous system.

Once caffeine is in the body, it blocks the effects of adenosine, a chemical that can cause AF.

His team also determined caffeine improved the hearts of patients with VAs.

Up to 500mg daily – equivalent to six cups of coffee – did not increase their severity or rate.

In fact, the study of 103 patients who had suffered a heart attack found those selected at random to receive an average of 353mg per day – almost four cups – had better heart rates and no significant disturbances.

Only two studies showed an increased risk for VAs – where patients ingested at least 10 cups and nine cups a day, respectively.

Dr Kistler said: ‘Caffeinated beverages such as coffee and tea may have long term anti-arrhythmic properties mediated by antioxidant effects and antagonism of adenosine.

In fact, one study published last year found that with each additional cup of coffee a person drinks, their risks of having a stroke or heart failure fall by eight and seven percent, respectively.

‘But overall it doesn’t increase the risk of heart attack, and it’s important that they’re straightening this out,’ she added.

Caffeine delivered by coffee and tea seem to bring benefits, but the researchers for the new study said energy drinks should be avoided by patients with pre-existing heart conditions.

One energy drink can contain anywhere from 160-500mg of concentrated caffeine. Three quarters of patients with pre-existing heart conditions who consumed two or more energy drinks a day reported palpitations within 24 hours.

Still, noted Dr Goldberg, some people may simply be sensitive to caffeine’s stimulant effects, and if it gives you heart palpitations, you should avoid it.

‘But the good news is that this study shows that caffeine doesn’t cause arrhythmias in people who may not have them,’ she added.

Both large population studies and randomized control trials suggest caffeine intake of up to 300mg per day – just over three cups – may be safe for arrhythmic patients.

However, there may be individual differences in susceptibility to the effects of caffeine on the factors which trigger arrhythmias – with
up to 25 percent of patients reporting coffee as a cause.

These should be advised to abstain. Future research looking at the impact of this on patients with heart disturbances could clarify this issue, said Dr Kistler.