Don’t mind me, I’m just living vicariously through Lana Condor’s vacation Instagrams. The To All the Boys actress recently spent some time in Positano on the Amalfi coast, which included relaxing fun in the sun. 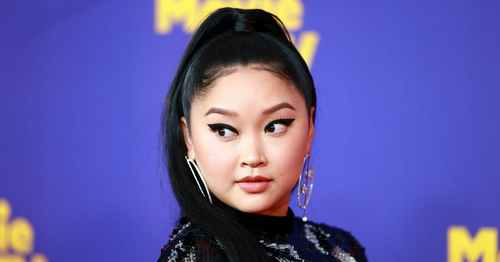 Lana packed a bikini for the getaway that I can’t stop thinking about: a dreamy swirl-print two-piece from brand 437.

This 437 Paradiso print is quickly becoming the look of the summer. Just a few days earlier, Euphoria‘s Sydney Sweeney wore the same print on her own tropical vacation. There’s still time to soak up warm weather, which means it’s not too late to see other celebrities jump on this trend train. If you’re eager to try out the same look before the season’s up, shop Lana’s exact swimsuit ahead.

Oh, the Many Stars Who’ve Fallen Under the Hypnotizing Spell of the Sexy “Wet Look” Dress

Megan Fox, Bella Hadid, Gigi Hadid, Chloe Bailey, Sza, Tinashe, FKA Twigs, and Rina Sawayama. What do these actors, models, and musicians have in common? Well, aside from powerhouse stardom, they share a love for Di Petsa’s “wet look” design. Every few weeks a new celebrity emerges wearing Dimitra Petsa’s creation and captivates fans all over again. But what is the story behind this style stars can’t get enough of?

Dimitra told W Magazine that her design was inspired by “feminist theory” in an effort to reject society’s desire for women to be “dry” – a form of oppression, in her eyes. “I wanted to create the view of a woman who’s completely wet, but dressed,” Dimitra said. “Then when you are out in public, people actually think that you’re wet and participating in a performance – something to be celebrated rather than hidden.” Her first creation came about in 2018 and has quickly evolved into varied styles like bridal gowns and separates.

The sensual designs feature mesh fabric that clings to the body, giving the appearance of emerging straight from a body of water. It’s surreal to see the optical illusion work its magic in front of the camera: the wearer in a seemingly soaked fabric while still dry. No wonder the creation has become a favorite of Hollywood’s brightest stars, and only continues to pick up steam. See the many standout people who’ve worn Dimitra’s design so far in the photos ahead.

You might be experiencing dream deprivation, the worrying condition disrupting our sleep quality