In a statement earlier this month, Dame Sally proposed a controversial ban on eating on public transport in a bid to curb rates of childhood obesity. There’s no denying that childhood obesity is a real problem. It sucks for everyone.

It sucks for the children who are statistically destined to be obese for the rest of their statistically shortened life. It sucks for the health system that doesn’t have a solution to the problem but tries to treat it nonetheless. It sucks for parents who are plagued with guilt and judgement, or else feel misguided and powerless to prevent their beloved child from gaining weight.

The only people who it doesn’t suck for are the people who benefit financially from the burgeoning food industry – but that’s a whole other story (you might want to watch Why Diets Fail on the new Netflix series Explained). But is a ban on eating on public transport a viable solution to the problem? Or is it masking a symptom of a society-wide disease, and ignoring the cause?

Bar a few months when I was paranoid that I would end up on the now defunct Facebook page Women who eat on tubes (why was that ever a thing?), I have always eaten freely on public transport (except smelly food – I’m not a monster). I did so this morning, in fact. I was running late and didn’t have time to eat at home so I grabbed a breakfast bar on my way out and ate it on the train. No big deal. Actually, if Dame Sally Davies, England’s outgoing chief medical officer, had her way, me and my Special K would have just broken the law. Partners in crime. Bonnie and her breakfast. 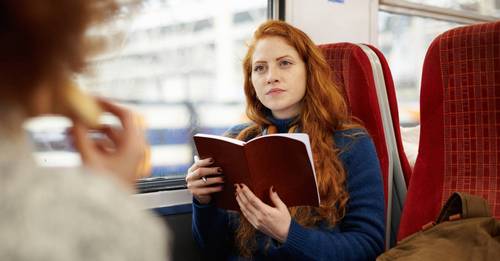 Firstly, the ban itself seems pretty futile. I can think of loads of reasons why someone would need to eat on public transport. What if someone is pregnant and feels faint? What if they’re diabetic and have to eat regularly to control their blood sugar levels? Dame Sally’s ban did specify certain exemptions, namely fresh water, breastfeeding babies and eating for medical conditions, but surely that leaves a huge amount of room for interpretation, let alone an obvious problem with enforcement (how could anyone prove you don’t have a medical problem? Would people need to carry a doctor’s note alongside their snack-pack?). Plus, imagine if someone was on a 5 hour train to Edinburgh. It would be unreasonable to expect them not to have a little nibble.

However, our mindless snack culture is undoubtedly unhealthy and the fact that modern life has reduced our meal times to sugar-filled cereal bars eaten on-the-go is part of the whole problem. We consume without thinking, choosing foods for their convenience rather than nutritional value. We are bombarded with adverts for high calorie snacks and takeaways, as well as being tempted at every turn with tasty treats, perfectly positioned by every till (even clothing shops are selling sweets to bump their profits).

If we had lifestyles that facilitated and supported healthy habits towards food and towards eating, we wouldn’t need – or want – to snack as much as we do. People need to be able to afford healthy, fresh food and have access to it as easily as unhealthy treats, if not more easily. People need time to prepare and digest what they’ve eaten, as well as to sleep and properly manage their stress and energy levels. I’m no doctor, but these seem to me far better ways to establish healthier eating habits than by shaming people who eat on public transport.

This is how pilates can transform your body and your mind