Research has suggested the CBD, the active ingredient in the oil, may help to alleviate epileptic seizures, but the practice is still very new and many doctors and policymakers remain skeptical.

Jaelah Jerger’s parents thought they had found a solution to their two-year-old daughter’s seizures in an unlikely form: cannabis oil.

The oil – which is free of the psychoactive ingredient in marijuana, THC – was approved in the Jerger family’s home state of Indiana but not, they soon found out, for treating Jaelah’s condition.

After initially encouraging them to use the oil if it worked, her parents, Lelah and Jade, say that the same physicians eventually called Child Protective Services on them.

At two, Jaelah (center) has been in and out of two hospitals and another wellness center as her parents Jade (left) and Lelah (right) try to find the best treatment for her epileptic seizures 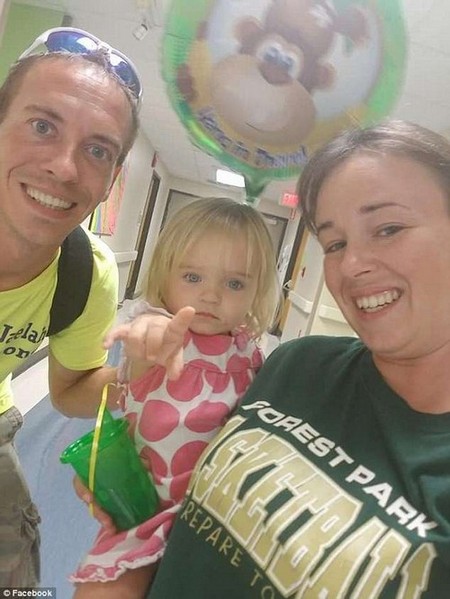 Lelah, a mother-of-five, noticed that a change would suddenly come over her daughter beginning when Jaelah was only six months old.

The cheery toddler would have what looked like a ‘startled reflex,’ Lelah says.

‘She would be walking around and then just have these jerk, and all of a sudden her arms would go up,’ she adds.

Nine months later, in May 2017, Jaelah had an episode so intense that she fell. Lelah rushed her little girl to a hospital – the first of countless trips the family would make.

An EEG at Riley Hospital for Children at Indiana University Health revealed that Jaelah was indeed having epileptic seizures.

That night, someone from the hospital called the Jerger family home and started rattling off medications they recommended to treat Jaelah.

They all seemed to Lelah to have more side effects than benefits. The first drug suggested to her could keep Jaelah from sweating. 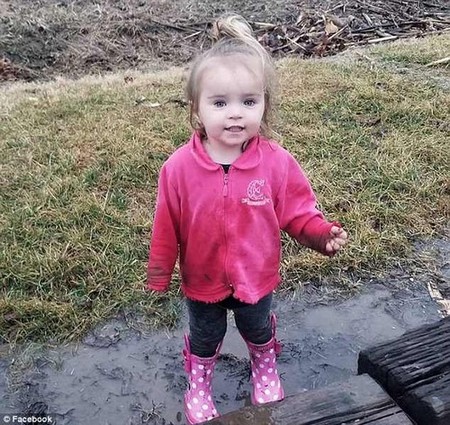 Jaelah, two, is an ‘outside baby,’ her mother says, and this was one of the reasons that she did not want her daughter on a seizure medication that might cause her to overheat

‘She’s an outside baby, if she could be outside 24/7, she would. If she isn’t going to be able to sweat, she’s going to overheat, so I don’t think that’s is an option for her,’ Lelah says.

The second option was Keppra, a common anti-seizure drug, which could cause her already slight underweight daughter to lose her appetite.

Frustrated, Lelah told the hospital she and her husband wanted a little time to do their research and discuss what was best for Jaelah.

Lelah and Jade decided to try a ‘functional wellness center’ her sister had recommended. There, a chiropractic neurologist with a PhD suggested Jaelah try cannabidiol, or CBD oil. 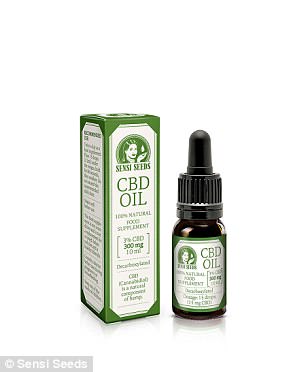 In one study, CBD oil halved the number of seizures had by patients aged between two and 26, according the Epilepsy Foundation.

For Jaelah, the results were practically instantaneous.

‘We started seeing the results right away with Jaelah. Within a couple of days we saw a reduction,’ says Lelah.

Jaelah hated the taste of the CBD, but before starting on it, ‘she had up to 30 noticeable seizures a day. Then she was down to one or two a day,’ her mother claims.

Currently, marijuana is legal for medical use in 29 states in the US. It is not broadly legal in Indiana, but in April 2017, the state signed a bill into law allowing seizure patients to get low-THC cannabidiol if their neurologists signed off on it.

When Lelah told Riley’s that she wanted to keep her daughter on CBD oil for a while before trying Keppra, she claims the reaction was ambivalent.

But that tune quickly changed during a series of follow-up calls and appointments.

Months later, ‘in a matter of hours,’ Lelah says, three phone calls with Riley’s devolved from conversations about logistics to the hospital informing Lelah that they had called Child Protective Services (CPS), she claims.

In response to their ordeal with CPS, the Jergers have started #Justice for Jaelah and are suing the agency for wrongfully taking a blood sample from their daughter

Lelah says the hospital hadn’t asked about Jaelah’s medications, but, in fact, she had started her daughter on a low dose of Keppra on the basis of a second opinion, even though the toddler wasn’t tolerating the medicine well.

Still CPS showed up, and told Lelah and Jade they had to keep their daughter on Keppra, plus prove every week through lab tests that she was taking the drug, or face medical neglect charges and lose their daughter.

They started Jaelah on Keppra, and quit the CBD oil.

‘She was just walking around the house, crying for no reason…she threw up and lost her appetite for the first time in her life,’ Lelah says.

Now that her daughter is taking CBD oil alone again, Lelah (left) says that Jaelah (right) has been seizure-free for four days

CPS claimed that Lelah and Jade were not keeping to the regimented lab tests, but in reality, Lelah says, the agency was asking for the lab work back before it would be ready.

The Jerger’s were able to prove that they were keeping their appointments, and, under the supervision of a new neurologist, CPS has backed off.

Now, Lelah and Jade are suing CPS for taking a blood sample from their daughter without the proper legal permission to do so.

The new neurologist has taken the little girl off Keppra and put her on only CBD, or ‘Charlotte’s Web,’ as Lelah calls it.