Top 5 delicious dishes that can harm your health. What did you eat for breakfast today? And what do you plan to satisfy your hunger for dinner? If you like to eat deliciously and yet you do not care what happens to a sandwich after you swallow it and swallow it, this article is not for you.

Do not spoil your appetite. If you try to keep yourself in shape and you are not indifferent to how you will feel in fifteen or twenty years, you certainly want to know the enemy in person, in time to avoid a collision with him.

We bring to your attention the top 5 delicious dishes that can harm your body.

They are temptingly pinched in a skillet, they can be quickly chewed on the run if you are in a great hurry. However, there is no need to rush, the nutritionists warn.

What is dangerous? “When frying, carcinogenic substances are formed, because of this the risk of malignant neoplasms increases,” warns Oksana Bragina, a nutritionist at the Research Institute of Therapy. “In addition, oxidized fats have an atherogenic effect – that is, they contribute to the development of cardiovascular diseases, atherosclerosis.” Take into account the fact that the fried patty contains twice as many calories compared to the baked pie, and this is fraught with a “replenishment” in the waist. 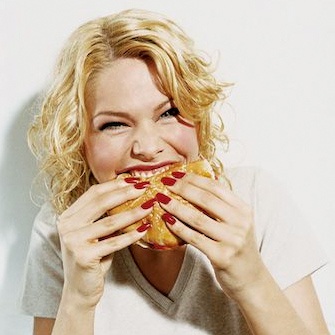 Than to replace? If your mother does not let you go without a ruddy patty, ask her in advance to replace the meat stuffing with vegetable or berry. “It is better to combine starchy products, including flour products, with vegetable fiber, and not with animal protein. Thus, pies with cabbage or berries are much more easily absorbed by the body than with meat, “- explains the dietician of the SFUC, Olga Poznyak. With all the richness of choice, boldly choose a baked patty – it is still less harmful than fried. And if you prefer to make pies yourself, you can experiment with flour of dark varieties.

Yes, fans of dumplings forgive us, but the pride of Siberian cuisine should be used with caution.

What is dangerous? In addition to the shock dose of calories, a portion of the ravioli gives a big load to the digestive organs, which is especially unpleasant for organs that already suffer from some diseases. Dishes “two in one”, in which carbohydrates combine with proteins, guaranteeing a long feeling of fullness, are fraught with unpleasant consequences.

“The cleavage of starch begins already in the mouth under the action of the alkaline medium of saliva, and the greater the alkalinity of the food lump, the less acid affects it,” says Olga Poznyak. – In addition, carbohydrates give a signal that the body is full, while the secretory activity of the stomach decreases. But the meat protein starts to be split only in the stomach in an acidic medium, under the influence of hydrochloric acid and pepsin. But as the secretory activity of the stomach at this time is reduced, then as a result, the undigested protein enters the intestine. 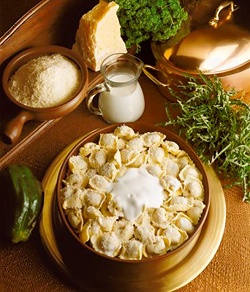 Than to replace? If you are an incorrigible fan of dumplings, pay attention to the filling and sauces. Nutritionists recommend to put cabbage in dumplings, in extreme cases, you can use chicken or rabbit meat. As for sauces, they often sin high in salt, which, as Oksana Bragina explains, is harmful to hypertensive people and obese people – salt causes fluid retention. Therefore, it is better to sprinkle the dumplings with olive oil or as a sauce to use mashed tomatoes with herbs and spices.

The constant companion of the New Year is present in our menu not only during the festive feasts.

What is dangerous? Again, a mixture of proteins and carbohydrates, and again off scale calorie ready meals. If you replace sausage with meat, it is unlikely that something will change – unless you get a more complete protein. The main enemy is mayonnaise. “In mayonnaise, artificial thickeners, dyes, flavors are often used instead of natural ingredients,” says Olga Poznyak, warning that there is as yet no data on the consequences of the use of these substances in large quantities. “Salads from fresh vegetables with vegetable oil and natural lemon juice are more useful,” Oksana Bragina reminds. According to her, they are the most useful, on the second place – snacks from boiled vegetables and close the list with everyone’s favorite salads dressed with sour cream.

Than to replace? As an experiment, dieticians offer to give up meat, add the pickled onion and dress the salad with olive oil. And besides, if you have a plate with olivier before them, then limit yourself to it, sacrificing other dishes.

By its satiety, rice balls with fish pieces, of course, are inferior to dumplings. But even with the wrong approach, they can adversely affect health.

What is dangerous? Everyone knows that poorly roasted river fish threaten opisthorchiasis. However, according to dieticians, any other fish, including sea fish, can have a variety of microorganisms. “Raw fish can be a source of infectious diseases,” warns Oksana Bragina. “It all depends on how conscientiously the supervisory bodies work.” Such an inoffensive product like rice, because of its high glycemic index, can be harmful to people with metabolic disorders, and soy sauce should be used with care by hypertensive patients.

Than to replace? Sushi is a specific dish, it’s foolish to try to replace it with fried fish and garnish. Nevertheless, according to Olga Poznyak, you can plant soy sauce with water, thereby reducing the amount of salt consumed. By the way, after a few decades ago in Japan, reduced the amount of salt in the production of soy sauce and miso consumed in large quantities, blood pressure in the Japanese significantly decreased.

Another birthday with a colleague, another tea party with sweets. But before you reach for the third piece of cake, think about it.

What is dangerous? “The most calorie food – as a rule, almost useless from the biological point of view. There is no use other than the pleasure of the process and the extra calories. For the nature of man it is uncharacteristic to consume such a quantity of refined (highly purified) products at a time, “- warns sweet tooth Olga Poznyak. After the celebration, you will go to your workplace, and the extra calories will remain with you. “In addition to calories, the cake provides a great load on the liver and pancreas, which means that serious violations of fat and carbohydrate metabolism can occur, increasing the risk of atherosclerosis, obesity and diabetes,” continues Olga Poznyak.

Than to replace? Home cake is better than purchased, dieticians believe. According to Oksana Bragina, vegetable fats produce substances that heat the development of atherosclerosis, so that any light margarine is more harmful than butter. Baking cake at home, you can make fresh tartlets and fill them with fruits or dried fruits, honey and nuts. If you can not refuse to buy handsome men, choose a cake with drier cakes.

Care for health in general and for nutrition in particular should be treated without fanaticism. Throw dumplings in the trash can still not worth it, but the refusal of fatty and fried in favor of raw or baked still has not hurt anyone.

How Felix White is helping other children battle the cruel disease that took him away, aged six