On Saturday, November 23rd, Thorne posted a video to Instagram in which she’s in the shower, playing with her wet hair and showing off how it now reaches the middle of her back – a triumph she thought may never happen again.

“In August of last year my hair was cut up to my neck and shoulders for a movie…and it seemed like it wasn’t growing back…but now look how long it is!!” Thorne wrote in the caption. It’s a feeling a lot of people who never thought they could grow their hair long again can relate to (or would like to).

Whether it’s been for roles or just for fun, Bella Thorne has changed her hair a lot in recent years. The actor has been seen with lobs, extensions, and every imaginable colour, including pink, dark blue, and a reddish hue so many thought was her natural colour. However, what Thorne wanted most, it turns out, was simply to have long, healthy hair. And from the looks of a new Instagram post, she has finally achieved it.

So how did she do it? Basically, she gave it a break. “I just did bleachless, heatless, and most importantly extensionless!!” she says, noting that at the moment, she is currently making an exception by having some green in her hair for a movie she’s filming. 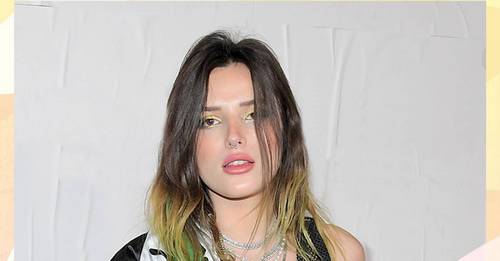 And she’s definitely on to something. While how long hair can grow is more or less genetically predetermined, Dermatologist Heather Woolery-Lloyd has previously said that cutting back on heat styling is a must for growing hair longer, and anyone who has ever over-bleached their hair can tell you all about the breakage that often comes with it.

“I have wanted my hair to grow back long again, ever since I was on shake it they cut it real short one day.. and then put in extensions to match it back to its original length,” Thorne explains, referring to the show Shake It Off, in which she starred from 2010 to 2013.

That experience made a huge impact on how she felt about her hair, but now she’s finally gotten back to the length and look she’s wanted for years. “It took me a very long time to not feel insecure without exts or heat or whatever…but now look at how long it is. I’m so proud ❤️”