In most North American hummingbirds, males court females by diving at them head on – but Costa’s hummingbirds (Calypte costae) perform their courtship dives off to the side.

Researchers now find that this strategy allows the males to aim sounds at potential mates as if they were using a megaphone.

During high-speed courtship dives, males fan their tails at the last second to create a high-pitched chirp. The faster the dive, the more those tail feathers vibrate and the higher the pitch created by the would-be Romeos. Researchers suspect that females prefer higher-pitched dives, which results in various strategies to boost the frequency of the noise a male makes.

A study published on 12 April in Current Biology finds that male Costa’s hummingbirds can twist half of their tail feathers in the direction of the female, manipulating the volume and pitch of their chirps (see video). The researchers suspect that the targeted noise also masks audio cues that the females can use to judge how fast the males are diving. 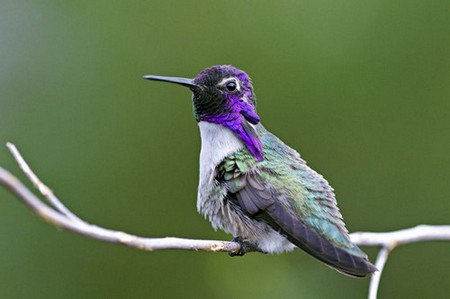 “You can think of the feather as being like a flashlight,” says Chris Clark, an ornithologist at the University of California, Riverside. “If you point the flashlight straight at something, the light is much brighter. And if you look at it from the side, at a 90-degree angle, there’s still some light but not nearly as much.”

Using high-speed cameras and a specialized wind tunnel that measures sound levels and direction, Clark found that male Costa’s hummingbirds are able to boost their dive sounds by as much as 11 decibels – compared to straight-tailed dives – by aiming the chirps at females. “Eleven decibels would be quite noticeable to a human,” he says. “A 10-decibel difference is the difference between a fairly quiet room and a somewhat noisy room.”

“I never could have predicted any of this,” says Doug Altshuler, an integrative biologist who studies hummingbird flight at the University of British Columbia in Vancouver, Canada. The tail-turning paper is just the latest in a long line of surprising discoveries Clark has added to the literature, he says. “I think it is very likely to wind up in textbooks as an exemplary case of sexual selection.”

Dual Antithrombotic Therapy with Dabigatran after PCI in Atrial Fibrillation

Wonder Woman 3 Is in the Works!

Shrimp cause a stir