But expressing this was tricky. “I wasn’t interested in the narrow definition of beauty I saw around me. In 2017, I was still picking up blusher that said, ‘So many men, so little time’ – and I thought, ‘I never think about men when I wear makeup.’

I wanted to create something that challenged that assumption.”

Meet Fluide: the makeup brand changing the way we think and talk about beauty.

“Growing up, I always felt like an outsider,” says Fluide cofounder, Isabella Giancarlo (left), 26, from New York, who identifies as gender expansive. “For me, it’s not feminine on one side of the spectrum and masculine on the other – we have a more nuanced experience of gender.”

Which is what Isabella did with business partner Laura Kraber, 48, from New York, after they met and had “an instant connection”. Together, they created Fluide: bold, gender-neutral, cruelty-free make up for all skin tones – with an even bolder message. Because disco-bright purple lipsticks may not seem out of the ordinary, but modelling them on trans, queer and non-binary people of colour is still disappointingly rare. 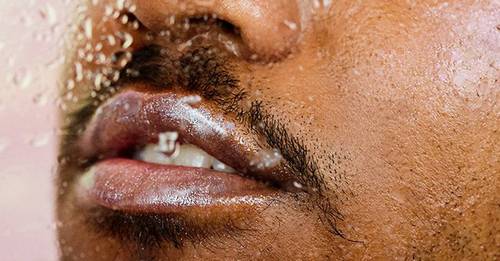 In 2017, Fluide glitter-bombed its way through the US beauty industry with campaigns featuring high-profile trans activists and queer models. It made the headlines and was quickly stocked online and at gender-free clothing shops in New York and Montreal. And from this spring, the products will be available in the UK.

It Started with a Message

“We were total beauty beginners,” says Laura, a former head of strategy for a health and wellness company who was inspired to start Fluide after hearing her teenagers discussing gender identity, and realising that this ‘cultural shift’ was not being reflected by brands. She and Isabella, also a creative director, started by reaching out to makeup artists and models for advice. They used social media to spread their message of inclusivity, connecting with people of all genders, sexualities and skintones. “The product came later,” says Laura. “We spent months researching manufacturers and testing products, planning the packaging and finalising the launch line.”

“We felt that we could create something new,” says Isabella, who notes there is nothing specifically ‘gender neutral’ about the actual makeup – it’s the marketing that’s powerful. “To locate makeup outside of the paradigm of cis-female beauty is incredibly liberating and it opens up the potential for makeup to be an empowering form of self-expression, rather than a symbol of the ways in which you don’t measure up.”

With Fluide, this is achieved by actively putting queer, trans, non-binary folk and people of colour in front (and behind) the cameras, as well as in the testing room, and in its ad campaigns.

Now, each Fluide product is named after queer-safe spaces: such as Ginger’s Bar in Brooklyn and Dalston Superstore in London. Fluide also gives 5% of its profits to US LGBTQ+ health organisations. The feedback has been amazing – and not just from LGBTQ+ communities. “One girl wrote to us saying, ‘I wanted to feel beautiful growing up, but the marketing didn’t reflect me,’” says Isabella. “With Fluide, we’re trying to expand the definition of beauty so that everyone has a seat at the table.” Inevitably, they have received backlash – from some conservative bloggers – but they remain undaunted. “It’s a reminder of what we’re fighting against,” says Laura.

The Future is Fluid

Today, Isabella and Laura work on Fluide full time and are planning to grow their team, and their product line. But Isabella says their biggest achievement is that they are “making a difference”. They’re happy to see other gender-neutral brands out there, such as Jecca Makeup, and feel that the more conversations about gender expansiveness, the better. “It can be daunting to simply be two non-famous entrepreneurs with a vision, but that’s how change in an industry happens,” says Laura. “I knew that a younger me was dying to see queer beauty represented by queer people,” adds Isabella. With business booming, it looks like they got their wish.