Global superstar Demi Lovato is releasing a four-part docuseries about aliens, and it’s coming (from another planet, potentially) very soon.

Want to hear something quite literally out of this world?

Demi is taking two pals on the road with them in this unscripted series as they try to gain new insights into extra-terrestrial life by interviewing scientists and alien abductees, while also conducting UFO experiments at known spots. Oooh.

Here’s everything you need to know about Unidentified. Brace yourself.

What is Unidentified about?

The docuseries follows Lovato as they embark on a journey of discovery when it comes to the “unexplained and the unidentified”, which started after an unusual experience at Joshua Tree National Park in California.

After seeing a moving light in the sky that was different to how an aeroplane would look, they decided to investigate further.

Demi heads on the road with their sister Dallas and their friend Matthew to talk to experts and those who claim to have encountered aliens firsthand. 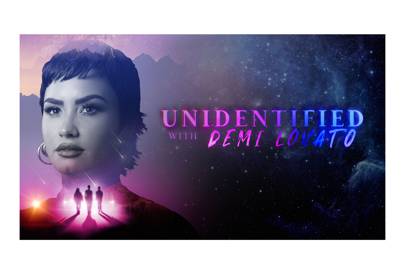 Calling themselves “a true believer” Demi is set to try and convince those nearest and dearest to them (as well as us viewers at home, we assume) that extra-terrestrials aren’t just up in our skies, but on Earth with us “waiting for us to reach out”. Yeeesh.

They are set to uncover secret government reports and recent eyewitness accounts – who doesn’t love a mystery solved?

Is there a trailer for Unidentified?

In a word, yes. And it’s a doozie. Watch below, and keep your eyes peeled for signs of alien activity.

When will Unidentified be available to watch?

Unidentified will be available to download and stream exclusively on Hayu in UK & Ireland from Friday 1 October. All four episodes are set to drop at once, so you might want to binge this one.