A deadly new exotic tick that could carry a host of rare diseases has invaded New Jersey, health officials have warned.

The pests known as East Asian or Longhorned ticks were first discovered in the state last fall, and have now been found in another county, according to scientists at Rutgers University.

The bloodsucking spider-like bugs are typically found in grassy areas and can transmit a variety of dangerous viruses such as Lyme disease.

Experts have warned that the tick will likely spread rapidly to other parts of the US especially as summer brings tick season. 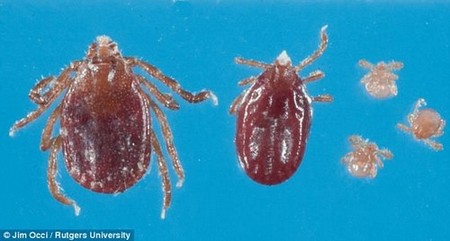 East Asian or Longhorned ticks have been spotted in two counties in New Jersey and are expected to quickly make their way to other parts of the US, experts have warned

The newest tick to arrive in the US has already migrated great distances, from its origins in Asia to Australia and New Zealand and now to New Jersey, according to James Lok, a professor of parasitology at the University of Pennsylvania School of Veterinary Medicine.

‘I would be surprised if it does not spread out of New Jersey quickly,’ Lok told Today.

Every year ticks start to emerge in May, June and July, bringing with them an increased risk of tick-borne diseases.

The chief concern with the Longhorned ticks is that they have been known to spread a deadly virus called severe fever with thrombocytopenia syndrome (SFTS).

SFTS has never before been reported in North America, but the longhorned tick could change that.

It’s too early to tell which North American diseases the tick can transmit, but in Asia it’s been shown to spread diseases related to Rocky Mountain spotted fever and anaplasmosis.

‘It’s got a pretty terrible track record in China, Japan and recently in New Zealand and Australia,’ Lok said. ‘And it’s not a stretch to assume it would be able to transmit the related diseases in North America.’

He added that it could also be able to transmit Lyme disease, a tick-borne illness that if untreated can wreak havoc on the nervous system, causing numbness and memory problems.

The entomologists at Rutgers University who tested the ticks told CBS that a number of steps were taken to kill them, but a number of them survived.

This particular type of tick is especially concerning because it has the ability to reproduce on its own, so it only takes one invader to produce thousands of eggs, spreading the population.

They also don’t discriminate when it comes to their targets. They’ll latch onto anything from a deer to a sheep to a human.

New Jersey officials have been working to eliminate the ticks in Union and Hunterdon County, and they have said the first tick checked for diseases turned up negative for all.

For the time being they are urging people to take the same precautions against this type of tick as they do with native ones.

What is your vaginal discharge trying to tell you?