People who suffer from mental health issues will often talk about ‘triggers’. Sometimes these triggers are substances such as alcohol; other times they are toxic people that make it their life’s mission to put us down.

For the past four years, my trigger has been my university. But when I went back for a reunion this weekend, this all changed. Instead, I felt empowered.

Whenever I am asked about my university experience, I never know what to say. On the surface, I graduated from Cambridge, armed with an English degree and a large group of wonderful girlfriends. So I would give the answer that I’ve always thought everyone has wanted to hear: ‘Oh, I loved it!’ before swiftly proceeding to change the subject to everything and anything else – ‘Where did you go to uni?’ ‘Isn’t the weather nice?’ ‘I like your hat…’

I’ve never wanted to admit what my experience was really like. The very fact I am using the word ‘admit’ shows the shame that I have felt towards it, as if I have something I ought to confess.

So, yes, I graduated. But I also had a full-blown eating disorder. If I allow myself to lift the block that is shielding my memories, I would see that my three years as an undergraduate were plagued by self-starvation, purging, knocking back diuretics and a hell of a lot of suffering in a secret silence. 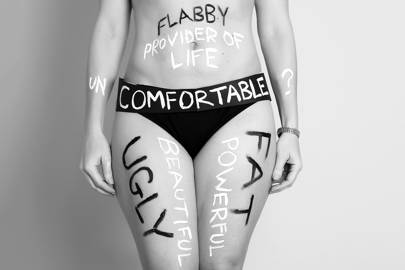 I started university with anorexia which was, by this point, manageable. I developed the bastard in my sixth form years. I fitted the typical character profile: a high achieving perfectionist with a devastatingly low self-esteem. I went to Cambridge telling myself that I was recovered but, by about three weeks in, this proved to not be the case. I struggled massively to keep up with seemingly ‘perfect’ girls who appeared to have everything under control. My anorexia took a grip and then, like an over-stretched spring, rebounded painfully into bulimia. And so began three years of anorexia with bulimic tendencies, a fluctuating weight and a tormented mind.

By my final year, I was working alone in my room avoiding my friends, and carrying out my disordered eating behind closed doors. If it wasn’t for the support of my wonderful tutors, I would have sacked it all in.

In most discussions about eating disorders, people want to know the following: how much weight did the sufferer lose? What did they look like at their lowest weight? What did he or she eat to get there? None of these points are at all relevant in understanding the severity of eating disorders. These curiosities don’t come close to painting a picture of the abuse and torture going on inside the sufferer’s head.

I wasn’t the thinnest in my year – but this doesn’t mean I wasn’t seriously unwell. Through wonderful campaigns, such as Beat’s current message that eating disorders can affect anyone, we’re finally starting to realise that they don’t have a particular ‘look’. Eating disorders don’t discriminate – they don’t care about your race, sexual orientation, gender or background. Pain comes in all shapes and sizes.

They are incredibly hard to recover from – this is true. But it’s important to remember recovery is most definitely possible. I’m finding it increasingly infuriating that we seem to often neglect talking about the empowerment that comes with recovery. There’s a strength like no other that can be felt when you realise that the shame you have felt for years serves no purpose.

Going back to visit my university was, for me, an opportunity to let go. It wasn’t the place that was at fault. Given the chance again with a happy mind, I could have loved it. Unfortunately, eating disorders deprive you of any sort of pleasure. Time and space – not forgetting medication and a hell of a lot of therapy – have played a huge role in allowing me to get closer to a happy state today. I’m proud of getting through my degree.

Most of all, I am proud of my friends. They have become my new female role models. They are all storming their mid-twenties with a vigour and openness, all the while proving that the ‘perfect’ girl I wanted to be like never existed. And thank God for that.

To anyone with experience of an ED, whether you are suffering and have not yet sought help, already in treatment, or recovered, just remember that it’s not your fault we live in a world where female empowerment is defined by a need to ‘be perfect’ and an allusion of self-control. You are strong, brave and already more than enough.

(Getting to the end of this article has been as cathartic as my visit back to university. Would highly recommend. *And breathe.*)