Compared to those who in indulge in beef, lamb and pork, non-red meat eaters are less likely to develop the disease in the part of the colon where faeces are stored, a study found today.

Researchers, from the University of Leeds, believe their findings could benefit people with a family history of the disease who are looking to reduce their risk.

Previous studies suggest red meat raises the likelihood of developing cancer due to it typically being high in saturated fat and potentially producing tumour-causing substances when cooked. Iron in meat may also damage cells, leading to cancer.

Past research also implies ‘toxins’ released from faeces during infrequent bowel movements may cause colon cancer, however, evidence supporting this is limited.

Bowel cancer affects around 41,800 new people every year in the UK. It is the third most common form of the disease in women. 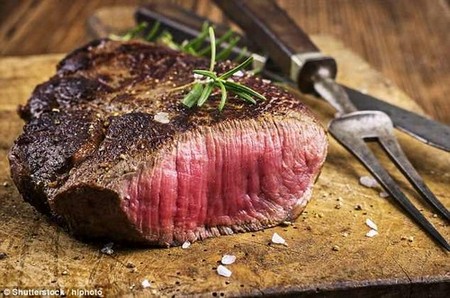 WHAT IS BOWEL CANCER?

Bowel, or colorectal, cancer affects the large bowel, which is made up of the colon and rectum.

Most cases have no clear cause, however, people are more at risk if they:

More than nine out of 10 people with stage one bowel cancer survive five years or more after their diagnosis.

This drops significantly if it is diagnosed in later stages.

According to Bowel Cancer UK figures, more than 41,200 people are diagnosed with bowel cancer every year in the UK.

It affects around 40 per 100,000 adults per year in the US, according to the National Cancer Institute.

‘Valuable information for those working on prevention’

Lead author Dr Diego Rada Fernandez de Jauregui said: ‘The impact of different types of red meat and dietary patterns on cancer locations is one of the biggest challenges in the study of diet and colorectal cancer.

‘Our research is one of the few studies looking at this relationship and while further analysis in a larger study is needed, it could provide valuable information for those with family history of colorectal cancer and those working on prevention.’

During the study’s 17-year duration, 335 cases of colon and 152 of rectal cancers occurred out of 32,147 female participants.

Results suggest eliminating red meat does not reduce people’s risk of rectal cancer. It is unclear why red meat only appears to raise the risk of the disease in the colon.

The researchers analysed women from England, Scotland and Wales.

The study’s participants completed a questionnaire that assessed how frequently they ate 217 types of food, including red meat, poultry and fish.

The findings were published in the International Journal for Cancer.

This comes after research released last month suggested all meat is as bad as each other when grilled.

The alarming study, by Harvard University, found grilling meat triggers the release of dangerous chemicals that inflame arteries and increase people’s risk of high blood pressure by 17 per cent if eaten more than 15 times a month.

On the back of their findings, researchers warned people to think twice about ordering their meat well-done or grilled and to opt for rare, raw or boiled dishes instead.

This can lead to the deposition of plaque in the arteries, which may result in heart disease.