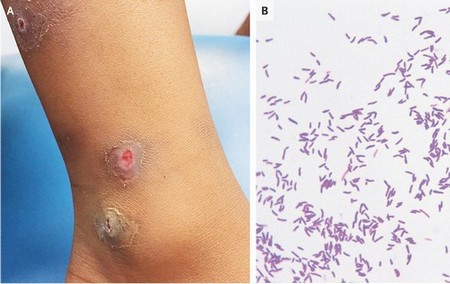 A 5-year-old, fully vaccinated girl was brought to the emergency department with pruritic lesions on both legs. She had recently returned from a trip to Sierra Leone. The lesions had appeared 3 weeks into her stay there and had increased in size and ulcerated. On presentation, she was afebrile, and an area over the medial aspect of the left lower leg was ulcerated and bleeding (Panel A). The C-reactive protein level was mildly elevated, and the white-cell count was normal. Empirical treatment with oral floxacillin was initiated, and a skin swab was sent for culture, which grew Staphylococcus aureus, group A streptococcus, and Corynebacterium diphtheriae. Gram’s staining showed predominantly gram-positive bacilli characteristic of corynebacterium (Panel B). An immunodiffusion test (Elek’s test) was positive, indicating that this diphtheria was toxin-producing. Early manifestations of cutaneous diphtheria can appear as nonhealing, well-demarcated ulcers. After the detection of diphtheria in this patient, the antibiotic agent was changed to clarithromycin. Contact tracing was undertaken, and chemoprophylaxis was given to household contacts. At follow-up 1 week after the change in antibiotics to clarithromycin, the skin lesions had fully healed.

The wiping technique your vaginal health depends on

One thought on “Cutaneous Diphtheria”