A 10-year old Cub Scout took a knee at a city council meeting in North Carolina to take a stand “against racial discrimination.”

Video of the city council meeting in Durham, N.C., on Monday night shows Liam Holmes drop down as the pledge is recited. The city council had invited the 10-year-old’s Cub Scout Pack to lead the pledge, North Carolina news station WCNC-TV reported.

“What I did was took a knee against racial discrimination, which is basically when people are mean to other people of different colors,” Liam told the outlet.

Liam said his dad, Scott Holmes, told him the history of people taking a knee, and the meaning behind the action resonated with him.

Scott Holmes told Raleigh, N.C. news station WTVD-TV that his family members are Quakers and don’t believe in taking oaths for religious reasons. Scott said he and his son hadn’t discussed “the racial inequality part of taking a knee beyond something religious.”

“I told him that it taking a knee is just an idea and he should do whatever he feels comfortable with,” Holmes, who is a civil rights attorney, activist and professor at NC Central University in Durham, told the outlet. “Because I know how it can feel weird, awkward to do something different than other folks.” 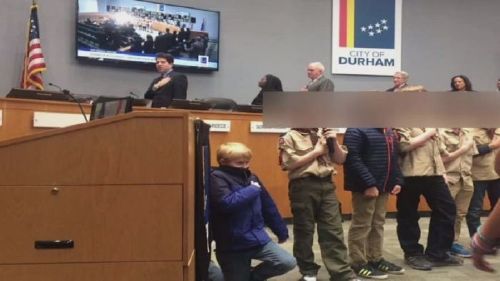 He was surprised by his son’s actions at the council meeting, but also proud of him.

Scott, who tweeted out the photo of his son at the city council meeting, was criticized by some on Twitter for what they saw as a father pushing his ideologies on his son.

Father not teaching his son respect of our flag and patriotism

So nice to see a father using his child to push an agenda. If your son felt so strong in his convictions, why is he covering his face? In a news article it says you are a Quaker and you do not believe in taking oaths. So how are you a lawyer then? You are nothing but a nut job

Way to press your own ideologies on a child. He seems to have his face covered possibly out of shame that you initiated. I see trial lawyer so it makes sense you want your time in the light. At the expense of your child…shame

Others, however, applauded Liam for standing up for what he believes in.

The children are our real leaders!

He said “What I did was took a knee against racial discrimination, which is basically when people are mean to other people of different colors.”

“At a very young age, you can be a model person and stand up for what you believe,” he said. “One of the things that we really have to be aware of is what our flag really stands for. Our flag stands for freedom of individual expression and freedom to express your conscience and we need to support that all the time.”

“The Pack doesn’t have any comment. This is a matter for the young man and his father,” the pack stated.

Yahoo Lifestyle reached out to the Boy Scouts of America but have not yet received a comment. The Raleigh News Observer reported the Scouting organization issued a statement on Thursday regarding Liam’s actions.

“Our youth members learn the importance of duty to country and honoring the people who serve our nation as part of the values outlined in the Scout Oath and Law,” the statement said. “The American Flag is one of the most important and prominent symbols in the Boy Scouts of America, and reverence for the flag flows through all aspects of Scouting. We value the freedom of everyone to express their opinion and believe to disagree does not mean to disrespect. Scouting is a movement of millions of people, with many different views on a number of topics and we must stay focused on that which unites us – working together to accomplish great things for youth.”

Liam told WCNC-TV that while this was his first time kneeling during the Pledge of Allegiance, it likely won’t be the last time he does it.

“I just liked the idea of it and now I just feel like doing it every time when we do the Pledge of Allegiance.”

Replace those old towels, and sheets with these insane, Presidents’ Day bargains