Crispy Hasselback Potatoes! Vertical slices and an extra-long roast in the oven makes these potatoes both beautiful and delicious. So many crispy edges! Perfect holiday side dish.

These crispy, crunchy, buttery potatoes with their accordion-like appearance take only a little more effort than a baked potato and are a knockout when served alongside a special dinner. Think holiday roast, date night steak, or Easter ham.

A Swedish chef at a restaurant called Hasselbacken in Stockholm back in the 1950s purportedly invented these potatoes. Rest his soul and bless him to the nines.

Here’s how it works: Slice the potatoes thinly, accordion style, but stop short of cutting all the way through so the slices remain attached at the bottom. To help guide your slices, place a chopsticks on either side of the potato while you cut – this will help to keep you from accidentally slicing through.

Drizzle the potatoes with plenty of butter and olive oil, and sprinkled with salt. Give them an extra-long roast in the oven so that the insides have time to become creamy and the outsides turn golden and crisp. 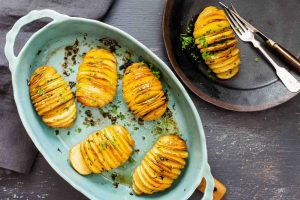 You can use just about any potato with this method, but I like Yukon Golds for their creamy texture and because the fist-sized potatoes are usually just the right size for one person. But don’t rule out larger Russets and sweet potatoes, or even small red potatoes. These also make good hasselback potatoes; just keep an eye on the portion sizes.

Other herbs such as thyme or rosemary in combination with the parsley would do nicely here, as would using all butter or all olive oil. You also could gussy up your potatoes with garlic, breadcrumbs, chopped nuts, Parmesan or other cheese.

But really, why would you? These frilled potatoes are decidedly scrumptious all on their own, and deserve their place in spud heaven as is.

Place the potatoes with the cut side up in the baking dish, spaced a little apart so each one has some room. Fan the potatoes open slightly. 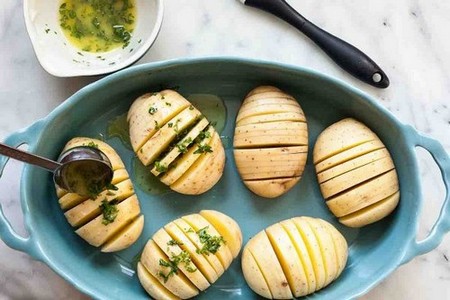 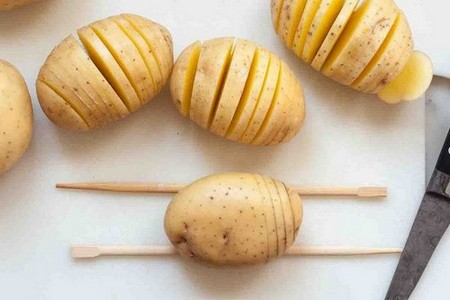 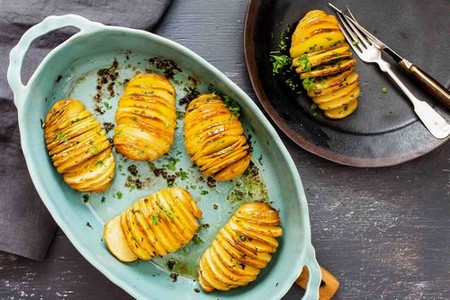 3 Season the potatoes: In a small bowl, combine the melted butter, oil, and parsley. Drizzle this over the potatoes and then use a pastry brush to spread the butter and oil mixture evenly and in between the slices of each potato. Sprinkle with salt.

4 Bake for 1 hour and 15 minutes, or until golden and crispy. The potatoes will fan out more during cooking and take on their accordion-like appearance. Serve hot. 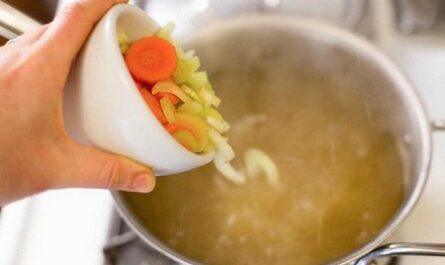