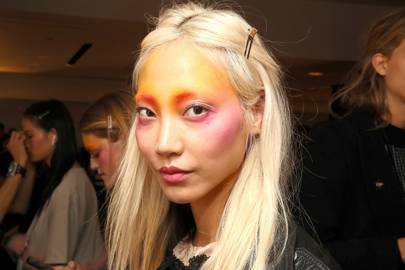 But the dreamy coloured temples and foreheads at Anna Sui had us hook, line and sinker.

One could expect no less from Pat McGrath, responsible for the multi-tonal sunset strobe that draped over six chosen model’s faces. The makeup maestro posted the kaleidoscopic look on her Instagram stories, sharing that her own MTHRSHPIII and MTHRSHPV were used. 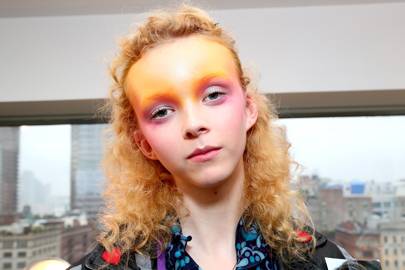 The technique, while bright and bold with block-coloured brows, is reminiscent of Rihanna’s 2017 Met Gala look, which put contouring method ‘draping’ on the map.

Back then, draping was essentially known as contouring with blusher. And sure enough, beige, browns and bronzes were soon swapped out for cherry temples in fashion shoots, and even on the streets. The term itself was actually coined by Marc Jacobs Beauty when they launched the product Beauty Air Blush Soft Glow Duos (£28).

And while using varying tones of plums, hot pinks and peaches for 3D-cheekbones is nothing new, makeup artists are now taking it to a whole new drool-worthy level using blues, greens, oranges and yellows.

The strategic pop-of-colour placement is usually centred around the tops of the cheekbones and temples, framing the eyes and often transitioning into eyeshadow, too. But the forehead is occasionally brought into play, giving us major superhero vibes.

And while this may have come from RiRi, the runway and fashion shoots, we can definitely see people rocking this on the streets. So grab your most colourful palette and get ready to roll… 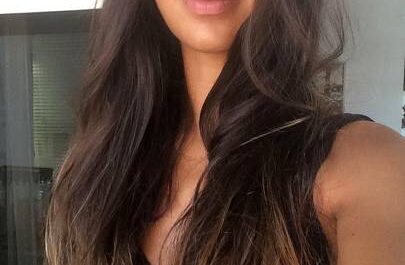 Experts have refuted the five most popular myths about epilation