If you’ve ever heard a baby name you didn’t like, you probably kept your opinions to yourself. But, Colin Jost is letting baby-name naysayers live vicariously through his mom with a hilarious retelling of her ongoing dissent of the name of his and Scarlett Johansson’s newborn son, Cosmo.

During an interview on Late Night With Seth Meyers, the Saturday Night Live writer admitted that while his family “is very supportive,” his mom was “slightly thrown by” their decision to name their baby Cosmo.

“[She] didn’t quite understand it. I don’t know if she thought it was a hippy thing,” he said before laughing and joking about “dirty hippies.” 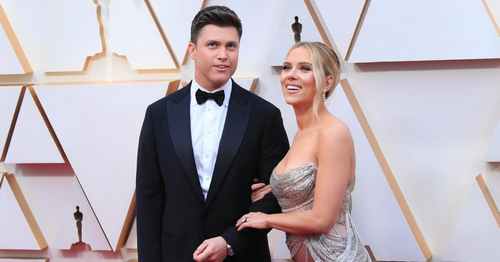 “She would call us and say, after three or four days, she’d be like, ‘Cosmo? And, now, is it final? Like, did you submit the birth certificate?'”

Although Jost has not publicly revealed how they decided on the name (except to joke, “We were just assigned it at the hospital”), he did share how his mom’s concern was relentless.

“She would call us and say, after three or four days, she’d be like: ‘Cosmo? And, now, is it final? Like, did you submit the birth certificate?'”

When he recalled telling her that, yes, they filed the birth certificate back at the hospital, she persisted: “She was like: ‘Oh, OK, interesting. ‘Cause I was reading that there’s also a name Cosimo with an I, so that could also be an option. Maybe you call him Cosimo. That’s his real name, but then you can call him still Cosmo.'”

Considering his mom lives in Staten Island, which encompasses a large Italian American population, she has since learned that the name Cosmo isn’t as novel as she originally expected.

“Eventually she started meeting various members of the Italian community who have a lot of Cosmo relatives, and then she would call and say: ‘I met someone. They said their uncle’s name is Cosmo, so it is OK.”

Before you think she gave her complete acceptance, there’s more.

Jost added that even after that, she called with alternatives. “‘There’s also a patron saint called Cosmas, so that’s another option.'”

For what it’s worth, Jost said the name “locked in” and that he and Scarlett won’t be taking any of these suggestions. “We don’t need more, worse options, variance on Cosmo,” he said. “Thanks, Mom.”

These are the most iconic movie dresses of all time