A cabin nestled amid the counterculture enclave that birthed Woodstock is not the first place you would expect to find the très cool Sarah Andelman, cofounder of Paris’s late, lamented concept store Colette.

She now heads up Just an Idea, a consulting company. Yet, here in the quiet New York hamlet of Chichester, the Parisian is clipping thyme in her garden outside the cottages she shares with her American husband, music-video director Philip Andelman, and their son, Woody. Though their main residence is in France, they retreat here for summers and vacations. In fact, Woody’s name is a testament to this very place.

A sitting area in the guesthouse turned family home.

Rewind 12 years, when a then-single Philip decamped from Los Angeles and wound up in the Catskills (where, by his account, “everyone has a recording studio”). In the summer of 2009, he was passing through Paris for a friend’s wedding and met Sarah. A two-and-a-half-week courtship followed, as Philip strategically booked photo shoots with the Beastie Boys and Jack White to draw out his stay. 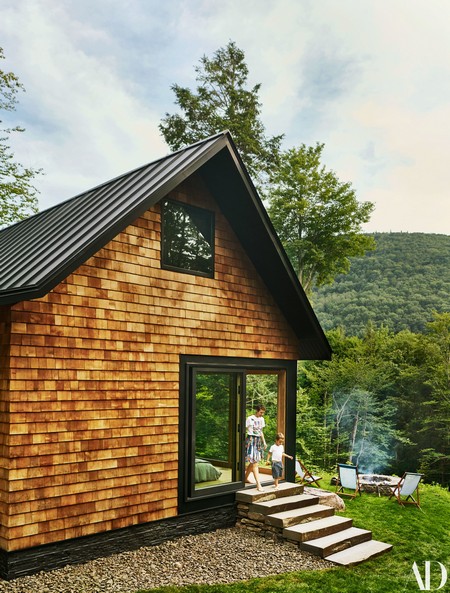 “Eventually the shoots end and I haven’t even gotten a kiss,” he laments. “So I come back to the mountains all bummed.” But he kept returning to Paris until his frequent-flier miles were depleted – still, no kiss. “So I do one last Hail Mary. I told her, ‘Do you not realize I’m trying to date you?’ Sarah shook her head no – I kissed her, and we’ve been together ever since.”

During Sarah’s next trip to New York for fashion shows, she visited Philip’s hideaway. “I loved it immediately,” she says. “Especially discovering it through Philip’s eyes.” They dropped by a neighbor’s house one evening to watch the sunset on the terrace, from which magical views of the mountainous landscape unfolded. “Not a phone line or road in sight,” says Philip. And both thought, Sarah recalls, “It would be fantastic to one day live here.”

Guests now bunk in the original cabin, where the kitchen and living room overlook the Catskills.

Now they do, having purchased the five-acre property and renovated its modest 1970s cabin with a neighbor, woodworker Jeremy Bernstein, coating it in white paint and updating the pink fiberglass bathroom to a simple gray slate. The Colette-blue trim around the terrace was Philip’s surprise to Sarah (the shade is echoed in everything from water buckets to a Smeg refrigerator). The home was christened Chalabin because, explains Philip, “it’s smaller than a chalet and larger than a cabin.” Weeks after the work wrapped up, they wed at a friend’s place nearby.

But a dwelling that had been perfectly sized for a couple proved to be too small once Woody came along. So Philip decided to build a guesthouse. “It’s his baby,” notes Sarah, who has creative control over their Paris flat (the Andelmans fondly refer to their properties as “his and hers” homes). Bernstein oversaw the project, collaborating with architect Kurt Evans, who drafted the initial plans.

The building is constructed of quarter-sawn white oak, “so there’s no end grain anywhere,” Philip relays with pride. Expansive picture-frame windows were sourced after Philip spotted the same ones at musician Lenny Kravitz’s Bahamas home – which prompted him to tear up the check he had already written for other, less costly windows.

“Originally I was like, It’s going to be a guesthouse; it doesn’t matter,” Philip says. “But once you make one expensive decision, you don’t want to cheap out on the rest.” The result? A guesthouse that the Andelmans loved so much, they moved in. Now when visitors come, they take over the original cabin and join the Andelmans for dips at a secret swimming hole. “The water tastes like sugar,” Sarah exults. “It’s paradise.”