Waffles are a serious business in my breakfast-loving household, and I recently set my sights on the mother of all maple-drenched ambitions: The Classic Buttermilk Waffle. This is such a simple and timeless breakfast that I figured it would be easy-peasy to come up with a good recipe.

Two bags of flour, a few dozen eggs, and several cartons of buttermilk later, I think I’ve got a winner! Crispy on the outside, soft in the middle, and a rich buttery flavor, these buttermilk waffles just beg for jam and syrup.

Do a little digging for buttermilk waffle recipes and you can find all sorts of “classic” recipes that use everything from cornstarch to coconut flour. I’m sure those recipes are great, but I wanted to make real buttermilk waffles. The kind my grandma would have made, with 100% buttermilk and no surprising add-ins or zany substitutions. Just the basics, please and thank you.

But even with just buttermilk, flour, eggs, and melted butter as the main ingredients, there are a surprising number of ways to put these waffles together. 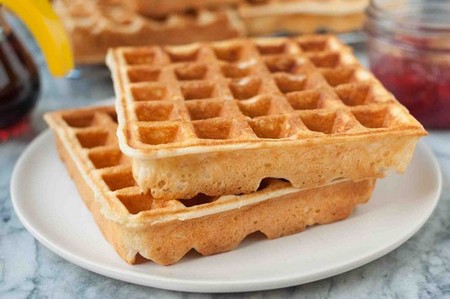 After much deliberation, I decided to try the following waffle tests:

One-Bowl Method: Mix the dry ingredients, make a well in the center for the liquids, then stir everything together. Why? So easy you can make them while still half-asleep.

Separate the Eggs: Same as the two-bowl method, but separate the yolks and whites. The yolks get mixed with the liquids, and then the liquids go into the dry ingredients. Finally, the unbeaten egg white is folded into the batter. Why? I first discovered this unusual method in a pancake recipe on The Kitchn. It turned out to be a brilliant trick and less fussy than beating egg whites, so I thought I’d give it a try here.

Beat the Egg Whites: Same as above, except beat the egg whites in a mixer until they hold soft peaks before folding them into the batter. Why? Many recipes swear up and down that this makes loftier, lighter, fluffier pancakes.

The results were really surprising. All the batches emerged from the waffle iron with a nicely golden crust and tender interior – no complaints there. The only problem was that the batches were also nearly identical.

I had expected to see some significant differences between the waffles, and I had particularly high hopes for the waffles made with beaten egg whites. But truthfully, I had a hard time telling the batches apart. Take a look for yourself! 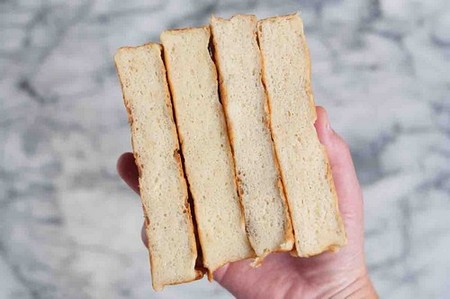 If you want to get nit-picky about it, the one-bowl method made perfectly fine waffles, but they had an ever-so-slightly denser and less even texture than the other methods. Both egg white versions, beaten and unbeaten, had an ever-so-slightly lighter texture, but personally, I didn’t feel like it was worth the effort. If I’m going to pull out the mixer and fuss with egg whites, I’d better be getting some extra-super-duper-lofty waffles for my trouble.

For me, I’m sticking with the two-bowl method for my buttermilk waffles. This is the Goldilocks option: the perfect compromise of ease verses effort. You end up using two bowls, but the results are worth the extra clean-up.

I did have one lingering problem with my waffles: the crispy factor. Straight out of the waffle iron, the waffles had a golden, lightly crispy exterior that I loved, but this quickly faded as the waffles cooled.

The solution is to toast the waffles in the oven for a few minutes – something I discovered while trying to keep a batch warm before serving. This cooks off some extra moisture, giving you a crunchy outer shell that stays crisp even once the waffles cool. Five to ten minutes at 250F will do the trick; much longer and they start to get tough and dry. 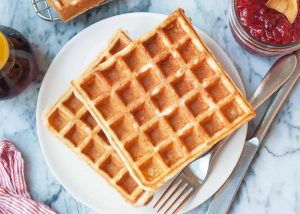 The oven trick also neatly solves the problem of serving your whole family at once. Transfer each batch of waffles to the oven as they’re ready, let them get crispy, and then serve. You can even make the waffles a day or two ahead and crisp them in the oven (or a toaster!) just before serving.

One final note: if you want extra-extra crispy waffles, replace half of the buttermilk with whole or 2% milk. I tried this swap in one final test batch, and even though it breaks my 100% buttermilk rule, by golly it makes some crispy waffles.