The star of The Crown has been unveiled as the protagonist of The Girl in the Spider’s Web, the much-anticipated follow-up to The Girl With The Dragon’s Tattoo.

The trailer for the upcoming film has just been released and Claire, who has replaced Rooney Mara, looks completely unrecognisable as Lisbeth Salander.

While we’re accustomed to seeing her donning a curly wig and lavish pearls as the Queen in The Crown, she’s ditched her crown jewels for badass piercings, a choppy black pixie cut hairstyle and plenty of leather.

In the trailer, we see her using a trap to capture a villainous husband, hang him upside down and tell him that he will turn over his assets to the wife he abuses.

“I’m a fan of yours – the CEO who beat up two prostitutes, but then got acquitted in court yesterday,” she says in the clip. “I’m transferring 20% of your cash to these two girls, the rest I’m transferring to your wife.”

Then she tells the wife: “He won’t hurt you again.”

The Girl in the Spider’s Web, which is produced by Sony and MGM, hits cinemas in November. We can’t wait.

It’s a stellar role for Foy after it was revealed that The Crown actress was paid less than her co-star, Matt Smith, for her role in the Netflix show. 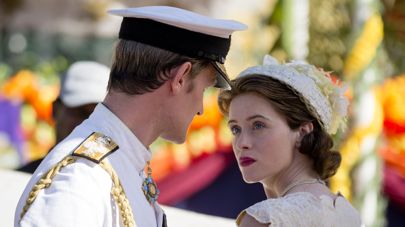 According to Variety, the producers of the royal drama confirmed that Claire earned less than Matt for the first two seasons of the show.

Claire, who played Queen Elizabeth II in one of the best tv series to come to Netflix, was apparently paid less than Matt, who starred as her husband Prince Phillip, because he was more famous due to his role as Doctor Who.

Producer Susan Mackie confirmed that this disparity in pay would be fixed, adding: “Going forward, no one gets paid more than the Queen.”

And it seems they’ve stayed true to their word. In a statement to the Daily Mail, Left Bank Productions, the company behind The Crown, said: “As the producers of The Crown, we are responsible for budgets and salaries. The actors are not aware of who gets what and cannot be held personally responsible for the pay of their colleagues.

“We are absolutely united with the fight for fair pay, free of gender bias and for a rebalancing of the industry’s treatment of women in front of the camera and behind the scenes.”

An expert claims that shampoo is actually ruining our hair, here’s why…