Chrissy posted a video to her Instagram stories in which she’s wearing a yellow bikini, the top of which has been pulled up to reveal the bottom of her breasts.

It’s clear from just that visual that she still has fresh scars running vertically down the centre of each, but Chrissy makes it perfectly clear why she’s sharing the clip.

“A few of my friends keep having to tell people that I really got my implants out, ’cause no one believes it,” she says in the mirror-selfie shot. “These are the scars.”

Then, following a clip of two-year-old son Miles eating in his highchair, Teigen shares a photo from the operating room, taken right after she was stitched up by her plastic surgeon. “Trust me lol,” she writes over the photo, putting two blue winky-face hearts over her nipples. 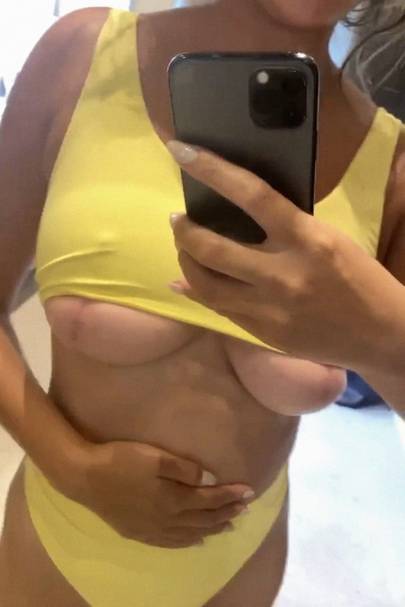 It’s been more than a month since Chrissy Teigen had her breast implants removed. As is the Chrissy way, she shared funny peeks into the process, like a note from four-year-old daughter, Luna, reading, “Have fun pulling your boobies out,” and even a cake with a tombstone design. However, Chrissy has also continued being her photogenic and swimsuit-modeling self, apparently leading some to doubt that the surgery actually took place. So, of course, she set the record straight.

The 34-year-old model and TV personality announced her plans to remove her implants, which she got at age 20, back in May.

Alongside a throwback photo posted to Instagram, she wrote, “I’m getting my boobs out! They’ve been great to me for many years but I’m just over it. I’d like to be able to zip a dress in my size, lay on my belly with pure comfort! No biggie! So don’t worry about me! All good. I’ll still have boobs, they’ll just be pure fat. Which is all a tit is in the first place. A dumb, miraculous bag of fat.”

Teigen is not alone in removing her implants. Plastic surgeons report that there has been increased interest in removal recently. “As more and more women are looking for smaller, more natural-appearing breasts, we’ve seen a large uptick in implant removal – either altogether or trading them in for smaller implants,” plastic surgeon Normal Rowe told Allure of the trend in late 2019.

The coolest short hair ideas from our favourite stars