Naturally, it’s also been “a little scary” for Halle, who admits that she’s been clinging to her sister over the years. Just as Chloe is the consummate firstborn, Halle fits snugly into her role as little sis, always looking to her “safety blanket.” She tells me that visiting Chloe on the set of The Georgetown Project gave her a new perspective. “I was just so proud of her, because you always want to see your beautiful sister succeed,” Halle says. “We always do those monumental things together, so when I was able to be on the outside and look in, it was really cool.” Ultimately Halle realized that – like gluing magazine cutouts to poster boards – some things don’t have to change: “Regardless of if I’m branching out, she’s always going to be there. That bond and our sisterhood will never go away.” 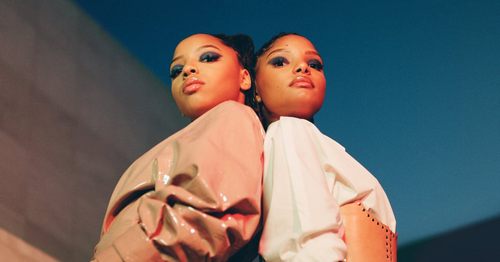 The sisters have flourished in the industry as Chloe x Halle the duo, two halves of a preternaturally talented whole. They appear at events together, maintain joint social media accounts, and don’t have separate Wikipedia pages (though that’s certainly going to change). They’re a dream team, navigating fame by leaning on each other. Working separately allows them to stretch as individuals, but as their careers evolve, it’s inevitable that their relationship will, too. Chloe seems genuinely joyful watching Halle grow into her own. “I see it happening right before my eyes and it makes me really happy,” she says. But those feelings of pride haven’t come without a bit of loneliness, too – especially as Chloe films her first solo project.

“In the beginning I was really, really sad,” she tells me. There have been plenty of tears and, according to Chloe, plenty of text messages, too. “[Halle] texts all the time; daytime, all the time,” Chloe laughs. “To have someone who’s always in your corner encouraging you, and making you feel better when you’re down . . . it’s just such a good feeling. I’m just happy to have her as my partner in crime in life.”

Though some things may be mapped out – production schedules, release dates, fishtail fittings – so much more lies ahead for Chloe and Halle. I ask where they see each other in five years. Halle springs up; she sees Chloe with every award in the book. “She’s going to flourish. What do you call it? EGOTs?” Chloe’s five-year vision includes even more plastered photos, but this time they’re of Halle, and they’re on giant billboards across the world. “I’ll be hearing her voice [singing] while walking down the street like, ‘Who is that? Oh yeah, that’s my sister. I know her. You don’t,’” she says.

The three of us laugh, but their predictions aren’t out of the realm of possibility. Their Grown-ish costars agree: actor Trevor Jackson tells me he hopes to see them collecting armfuls of trophies and “truly dominating the world.” Shahidi insists Chloe and Halle’s hard work knows no bounds and remembers them simultaneously filming season one of Grown-ish and mixing their debut album, The Kids Are Alright. “The sky is not even the limit,” she cosigned.

A Complete Guide to the Classes Offered at Row House