A Chinese doctor who was arrested after he criticized a best-selling traditional Chinese remedy has been released, after more than three months in detention.

Tan Qindong had been held at the Liangcheng county detention centre since January, when police said a post Tan had made on social media damaged the reputation of the traditional medicine and the company that makes it.

On 17 April, a provincial court found the police evidence for the case insufficient. Tan, a former anaesthesiologist who has founded several biomedical companies, was released on bail on that day. Tan, who lives in Guangzhou in southern China, is now awaiting trial. Lawyers familiar with Chinese criminal law told Nature that police have a year to collect more evidence or the case will be dismissed. They say the trial is unlikely to go ahead.

The episode highlights the sensitivities over traditional Chinese medicines (TCMs) in China. Although most of these therapies have not been tested for efficacy in randomized clinical trials – and serious side effects have been reported in some – TCM has support from the highest levels of government. Criticism of remedies is often blocked on the Internet in China. Some lawyers and physicians worry that Tan’s arrest will make people even more hesitant to criticize traditional therapies. 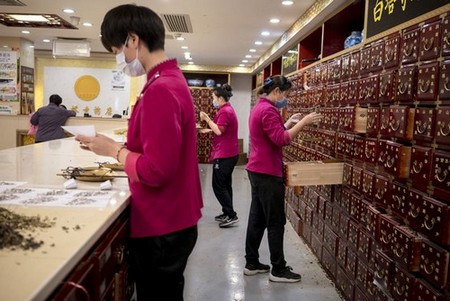 Tan’s post about a medicine called Hongmao liquor was published on the Chinese social-media app Meipian on 19 December. It has since been removed, but according to the police report it alleged that Hongmao liquor, which purports to treat dozens of conditions, is a “poison”. The post also contained health advice for ageing patients.

Three days later, the liquor’s maker, Hongmao Pharmaceuticals in Liangcheng county of Inner Mongolia autonomous region, told local police that Tan had defamed the company. Liangcheng police hired an accountant who estimated that the damage to the company’s reputation was 1.4 million Chinese yuan (US$220,000), according to official state media, the Beijing Youth Daily.

In January, Liangcheng police travelled to Guangzhou to arrest Tan and escort him back to Liangcheng, according to a police statement.

Xia Nan, a criminal lawyer at Beijing Huayi law firm, says that the statute under which the police arrested Tan, Criminal Law Article 221, calls for punishment of those who spread “falsified information”. “Tan is a specialist with a doctor’s credentials, who commented from a scientific perspective,” says Xia. “His comments clearly were not illegal.” The Liangcheng police department did not pick up the phone when Nature called.

Upon his release, Tan told an online Chinese news outlet The Paper that he did not deserve to be arrested. Tan said he considers his stint in detention a form of “life training” and does “not regret writing the post, which is something I am supposed to do as a doctor”. Nature’s attempts to contact Tan were unsuccessful.

Sales of Hongmao liquor reached 1.63 billion yuan in 2016, making it the second best-selling TCM in China that year. It was approved to be sold by licensed TCM shops and physicians in 1992 and approved for sale over the counter in 2003. Hongmao Pharmaceuticals says that the liquor can treat dozens of different disorders, including problems with the spleen, stomach and kidney, as well as backaches.

But Tan’s arrest has also drawn significant media attention on the company. More than two dozen provincial or city health authorities have reprimanded Hongmao Pharmaceuticals over the past decade for misleading advertisements about the therapy’s health benefits. This led to temporary suspension of sales in several cities until the advertisements were removed.

On 16 April, China’s drug regulator issued a statement calling on the company to explain punishments it has received for false advertisements in the past five years, to report all adverse effects recorded in that period and to provide further explanation of the liquor’s safety and efficacy to address public concerns.

The drug regulator also requested that the Inner Mongolian drug agency, which is tasked with enforcing the regulator’s rules, take a closer look at Hongmao Pharmaceuticals to ensure its products are safe. The agency has threatened to revoke the company’s license to make drugs if the company is found to have violated any regulations.

Hongmao Pharmaceuticals did not respond to Nature’s request for an interview. However, Wang Shengwang, general manager of the production center of Hongmao Liquor, and Han Jun, assistant to the general manager, gave an interview to The Paper on 16 April. The pair said the company did not need not publicize clinical trial data because Hongmao liquor is a “protected TCM composition”. Wang denied allegations in Chinese media that the company pressured the police to pursue Tan or that it dispatched staff to accompany the police.

Hun said that only 137 cases of people experiencing adverse side effects from the liquor have been reported in the past 13 years, and most of those were mild. Wang also said that local distributors of Hongmao liquor – not the company – were responsible for many of the advertisements that led to temporary suspensions of liquor sales.

Li Qingchen, a paediatric surgeon at the Harbin Children’s Hospital and a prominent critic of TCMs, says that the Tan case might make Chinese people more sceptical about the safety and effectiveness of Chinese medicine. “But most will probably think this is just a problem with Hongmao liquor, and still think Chinese medicine is reliable,” he says.

Xia is worried that the case could further silence public criticism of TCMs, environmental degredation, and other fields where comment from experts is crucial. The Tan arrest “could cause fear among scientists” and dissuade them from posting scientific comments, he says.

Where the wild tales are: how stories teach kids to nurture nature