You could see my eyebrows nearly touch my hairline when Kendall Jenner shared her reaction to the progressive win. “We did it!” she wrote on her Instagram Story. My first thought was, who did it?

I certainly don’t remember an endorsement post on her ‘gram. To give credit where it’s due, Kendall has been vocal about getting people engaged in the election. She opened up her platform of 141 million followers when she hosted Vote Save America on her Instagram Live and added a voting message to her Halloween costume. These were certainly efforts toward turnout, but a Biden-Harris endorsement they were not.

Over the past few months, several celebrities have tirelessly gone to bat for Joe Biden and Kamala Harris in the hopes of seeing them become the next president and vice president. On Nov. 7, their efforts came to fruition when the duo were declared the projected winners of the 2020 election.

These stars certainly have reason to take pride in their contributions. However, consider me a little skeptical about the celebrities suddenly coming out of the woodwork as silent Biden-Harris supporters all along. 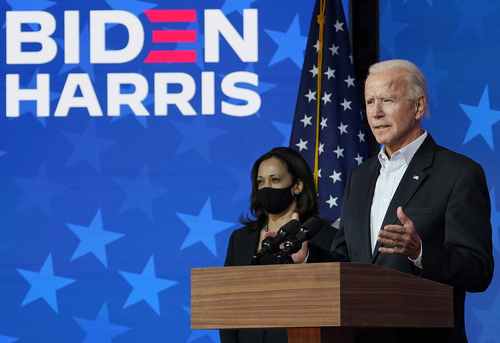 If you’re following an influencer on social media, I can almost guarantee you’ve come across a vague request to “Vote” or “Let your voice be heard!” There were pushes to register, to perform your civic duty, to make sure every vote is counted. In elections past that might’ve been enough. But in 2020, those efforts don’t cut it. We’re battling for Black lives, for the LGBTQ+ community, for affordable healthcare, for a path through a deadly pandemic. We demand more.

We’re battling for Black lives, for the LGBTQ+ community, for affordable healthcare, for a path through a deadly pandemic. We demand more.

Her sister, Kim Kardashian, also shared a number of photos of the president-elect and vice president-elect on her social media following the election results, raising skepticism from her followers. Kim was famously cagey about where her allegiances lay, presumably because her husband, Kanye West, also launched a presidential campaign. West was never a viable candidate for this race, however, and Kim never formally endorsed him either. If she was vying for Joe Biden all along, it would’ve been nice to let her 191 million followers know.

The issue doesn’t start or stop with a reality TV family, although they’re among the few top-followed Instagram accounts that never endorsed a candidate. (Celebrities like Ariana Grande, Lizzo, and Taylor Swift used their massive platforms to firmly throw their support behind the Democratic candidates.) This reluctance to publicly pick a candidate reached the corners of TikTok where influencers like Addison Rae – who shares content with almost 70 million fans – have kept quiet about their votes. Comedian Kevin Hart also took a similar stance and reposted celebratory election content without ever endorsing Biden-Harris.

There’s an argument to be made that celebrities shouldn’t have to share their political opinions with fans. They’re personal. They’re private. But if you’re passionate enough about a candidate to publicly celebrate their wins as your own, you should be comfortable cluing your followers in before they cast their ballots.

Especially since these stars have influence. That’s truly why “celebrity” and “influencer” are interchangeable. Not to harp on the Kardashian-Jenners, but they’re proven to have significant sway when they do the bare minimum. Remember when Kylie Jenner posted a thirst trap that doubled as voter registration awareness? Her ‘gram increased traffic to Vote.org by 1,500 percent. Imagine what an actual endorsement could’ve sparked.

Where were you months, weeks, even days ago?

What we needed before (and after) the election was clarity. When celebrities hide behind ambiguity, they distance themselves from communities who may need their help, may need their vote. It’s incredibly frustrating for them to resurface after the votes have been cast and the fight has been fought, ready to take part in the celebrations. Where were you months, weeks, even days ago? It’s easy to join the party once we’ve all started celebrating, but don’t bother to show up if you never RSVP’d in the first place.