But the future of the brand has been rocked in recent years by rumours of sinking sales as the high street store struggles to keep up with competitors like Primark (last year, the company admitted that store closures were a possibility), as well as concerning reports in 2017 that their products contained traces of asbestos.

The rumours were confirmed in March of this year by The US Food Drug Administration (FDA), who identified the presence of asbestos in three of the brands products after undertaking their own investigations.

Of all the shops on the high street, Claire’s Accessories has perhaps done the most to cement its place in the hearts of a generation. It’s where we went to get our ears pierced for the first time, it’s where we picked out our first iteration of makeup (sheeny lip glosses and sparkly eyeshadows) and it’s where we went during uni to load up on 80s neon tutus and camo face paint for freshers week.

This week, Claire’s has come under fire once more, after the FDA identified a fourth product found to contain the damaging substance. Defined by the British Lung Foundation as “a group of minerals made up of microscopic fibres,” when breathed in, asbestos has been shown to damage lungs and even cause cancer. 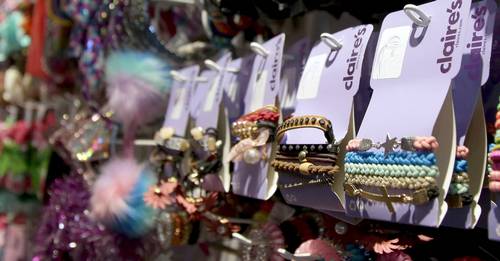 The latest offending product, the JoJo Cosmetic Kit, raised concerns since small particles of the contaminated eyeshadow in the kit can become airborne when swept onto lids.

Speaking to Today Style, Claire’s Stores, Inc. confirmed the palette has been voluntarily recalled “out of an abundance of caution after testing by the U.S. Food and Drug Administration indicated the possible presence of trace amount of asbestos fibres in the powder eyeshadow element of the kit.” They’ll be offering full refunds to anyone who has purchased the kit.

Despite the recall, the brands spokesperson maintained that Claire’s “stands behind the safety of this product and all other Claire’s cosmetic items as such small trace amounts are considered acceptable under European and Canadian cosmetic safety regulations.” Though they noted that “Claire’s moved to talc-free cosmetic manufacturing,” last year to “prevent any further concerns about talc contamination.”

This powerful Netflix documentary about period poverty, is the REAL big winner, from the Oscars