At the event, Hudson honored the Queen of Soul, who posthumously received the Pulitzer Prize Special Citation, making her the first-ever individual woman to earn a special citation prize since the award’s inception in the early 1900s.

The Pulitzer board gave Franklin the award for “her indelible contribution to American music and culture for more than five decades.”

Jennifer Hudson put the “amazing” in “Amazing Grace” on Tuesday when she performed a powerful tribute to the late Aretha Franklin. The Grammy-winning singer and actress crooned a rendition of the Gospel tune at the Pulitzer Prize luncheon at New York City’s Columbia University.

Taking the stage clad in a black and white dress, Hudson showed off her strong vocals, reminiscent of Franklin’s incredible 1972 performance of “Amazing Grace” (which has inspired an upcoming documentary.) 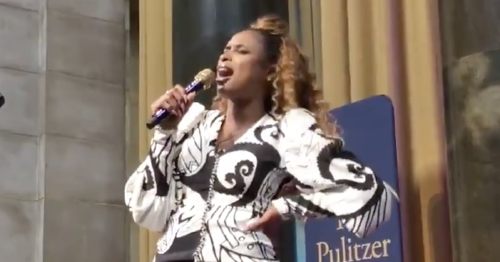 Franklin’s impact seemed to take over the atmosphere at the ceremony as audience members looked on in awe while Hudson – who also sang a salute to Franklin during a televised tribute event in March – dug deep and delivered on the resounding set.

In an interview with the Associated Press, Hudson spoke about feeling connected to the Queen of Soul. “She’s always with me, I feel,” she said of the singer who died of cancer at age 72 on Aug. 16. “I always keep her in my mind and in my heart, and try to lead in a way that I know that she would want me to.”

Dead to Me Is Officially Returning For Season 2