But it’s all a scare tactic. The Handmaids aren’t killed; Aunt Lydia (Ann Dowd) just wanted to browbeat them back into submission. They “rebelled” against her in season one’s finale by refusing to stone Ofdaniel.

It was a reminder that Gilead’s power structure is primitive, tyrannical, and brutal – and if they “disobeyed” again, the hanging might actually happen.

To call the opening of season two of The Handmaid’s Tale “shocking” would be an understatement. The Handmaids in June’s (Elisabeth Moss’s) city are brought to an undisclosed location, their mouths covered with restrictive harnesses.

Aggressive male soldiers violently push the women from point A to point B, screaming at them to stay in line. Eventually we learn they’ve been taken to an abandoned baseball field now filled with nooses. The fear on the Handmaids’ faces is palpable. When those nooses are placed around their necks, their fear becomes absolute terror.

This all unfolds within the first 10 minutes of season two, and the violence only escalates from there. In one scene a Handmaid is forced to place her palm over an open stove flame. Minutes before this we see another pregnant Handmaid chained to a bed. In episode two we learn about the Colonies, a prison where infertile, “disobedient” Handmaids are forced to dig holes in toxic soil. The women are also routinely electrocuted, dismembered, and, in some cases, subjected to genital mutilation. 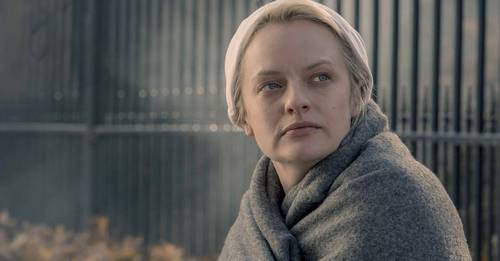 I wish I could say that I am excited for season 3 of The Handmaid’s Tale,

Their feelings are certainly valid. After all, season one managed to scare the hell out of everyone without the seemingly gratuitous violence. Instead the showrunners used psychological manipulation to paint a picture of this dystopian world – one where women are stripped of their rights and everyone who isn’t a white, straight, cisgender man is persecuted. A world that, when you think about it, could easily become our own if we’re not vigilant. This is what The Handmaid’s Tale aimed to convey, and it worked – without making viewers overtly squeamish.

I’m fascinated by people who think The Handmaid’s Tale is unrealistically violent. It makes me think you aren’t from the US. There are serious thinkpieces on state-sanctioned rape being passed around right now from incels on major news sites. THH isn’t that far off reality.

One fan posted an entire Twitter thread about why The Handmaid’s Tale isn’t needlessly graphic:

Allow me to explain:

The Handmaid’s Tale is an insight into:

– Our underlying views of women’s roles in society
– The danger of religious extremism, and allowing it to go unchecked
– How women find power in situations of oppression
– How bigotry and extremism are inseparable
– Why we should never>>

be idle about political leaders, especially now in 2018

It’s extremely relevant to our country’s situation right now, as well as any country where there is oppression by extremists, religious or otherwise (ex: Taliban)

While I completely understand that The Handmaid’s Tale >>

People get off to all kinds of shit, but this series was never intended to cater to them >>

It’s meant to send a message about why this stuff is horrible, and why it’s also /entirely possible/

So is The Handmaid’s Tale truly too violent, or is it simply holding a mirror to what the world is and could become? One thing is certain: If the show continues on this path of violence, it has to lead somewhere. There has to be a payoff, preferably in the form of June burning Gilead to the ground. With everything going on in the world right now, it’d be nice to see that too.

Netflix’s Dream/Killer is apparently the new Making A Murderer