Cardi B was ordained as a Jeremy Scott clad Cardinal for her very first Met Gala appearance after months of attempting to conceal her pregnancy.

With a mixture of heavy tulle exploding from her hips and OTT embellishment, the Bronx-born rapper was seen to unashamedly embrace the form hugging style the Moschino maternity look had to offer.

Despite the theme being ‘Heavenly Bodies: Fashion and the Catholic Imagination’, Cardi B decided not to dress like the Virgin Mary, yet the regal display turned the star into quite the Saint of Style.

Completing one of her most outlandish maternity looks to date, Cardi slipped on the accessory for Met Gala dresses 2018: the bejewelled headpiece. Perhaps requiring serious weightlifting training down the gym just to carry the heavy load of the headpiece, the rapper eased down the Met Gala 2018 red carpet. 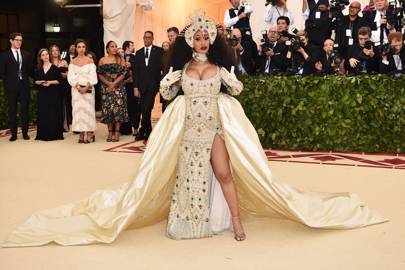 After such a regal display, Cardi B we crown you the queen of zero f**ks given maternity dressing.

Cardi B’s pregnancy announcement may have been the biggest celebrity news of this year yet. Since the news broke that Cardi and her fiancé, fellow rapper Offset, are expecting their first child there has been much talk over whether is it a boy or a girl?

If you watched Cardi’s Saturday Night Live performance – where she revealed her baby bump for the first time in a skin-tight, goddess-like dress – you know that she is far along enough to know the sex of the baby.

Unfortunately, Cardi was not the one to reveal the gender. In a very honest mistake her sister, Hennessy Carolina, posted a heartfelt message to Cardi that featured a cheeky pronoun – and of course, the internet was fast to spot it.

Are you ready for it? Cardi is having a (drum roll, please) GIRL!

Either way, you NEED to read Hennessy’s full message because it will bring a tear to your eye:

Over the past few months, rumours have been flying around that rapper Cardi B, real name Belcalis Almanzar, was pregnant – but she’d firmly denied the rumours. The gossip was fuelled by her frequently opting for loose-fitting outfits, keeping her stomach hidden at all times.

Despite previously shutting down the pregnancy rumours in February with a legendary comeback (Let me fat in peace), it seems she was just waiting for the perfect time to announce her good news. During her performance on Saturday Night Live last night, she confirmed that she is indeed pregnant, and revealed her baby bump to ecstatic fans.

As she performed Be Careful, she wore a white dress which perfectly highlighted her stomach. In an announcement reminiscent of Beyoncé’s VMAs reveal, the camera panned down, showing off her baby bump and prompting a huge cheer from the audience. You can watch the feelsy moment in the video below.

She also took to Twitter after the performance had aired, revelling in the success of her debut album Invasion of Privacy, which went gold on its release day due to the success of Bodak Yellow.

I started winning when the whole world was doubting on me !think imma lose with my little baby counting on me ?

Her fiancé, Offset (Kiari Kendrell Cephus), also posted a sweet photo of the pair together, thanking everyone for their support.

It’s definitely the icing on the cake for an already stellar year for Cardi B. Congrats!

Cardi B: 11 important facts to know about the rapper who had the GRAMMYs in hysterics 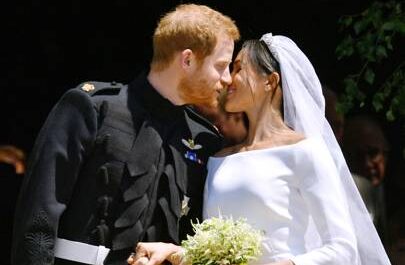