In March 2017, Delevingne made a big change, cutting her hair into a long bob and bleaching it a shade of platinum blond that was so light, it almost looked white.

But the shorter cut didn’t stop her from doing the plaits and waves she loved before, proving to the naysayers just how versatile short hair can be.

Three months later, Delevingne dared for an even bigger hair change, arriving at the Met Gala in May 2017 with her head shaved, which she did for her role in Life in a Year. But even a buzz cut didn’t stop Delevingne from having fun with her beauty look.

For the Met Gala, she decorated her shaved head with silver paint and jewels, hinting at all the fun colors and designs her and her go-to hairstylist, Mara Roszak, would try in the weeks and months to come. 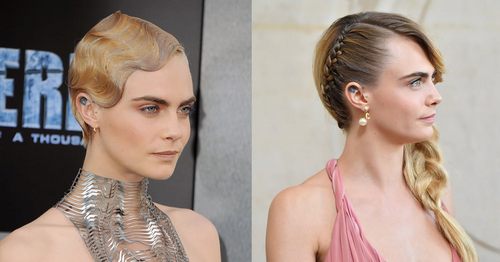 Cara Delevingne is many things: a successful model, actor, activist, and brand ambassador. And she just so happens to always have incredible hair while doing all three.

When it comes to her hair, let’s just say that she’s definitely not scared to try … well, anything. In the beginning of her career – when she was walking every single runway show in New York, London, Milan, and Paris, and simultaneously making her acting debut in Anna Karenina – she pretty much left her mid-length, ash-blond hair alone. But that didn’t keep her from experimenting with lots of different styles. In those early years, she played around with plaits and waves and the occasional hat or hair accessory.

In 2019, Delevingne has embarked on the tedious process of growing out her hair, but the actor’s met the challenge head on. .. literally. She’s masked the awkward regrowth phase with strategically placed accessories, half wigs, and twisted top knots.

Due to coronavirus, we haven’t had quite as many hair moments in 2020 so far, but luckily Delevingne served some fabulous looks just before the global pandemic hit, including old Hollywood-style waves and an orange feathered ponytail.

Ahead, we rounded up Delevingne’s red carpet hair highlights so that you can follow the star’s ever-changing hair evolution – and hey, maybe even get inspired to finally make a big hair change of your own.

Harnaam Kaur on being racially profiled at the airport