Two major reports warn 9/11 survivors may have a more severe risk of cancers than previously thought – and the chemicals they were exposed to make their diseases more aggressive than usual.

More than 17 years on from the attacks, scores of studies have shown the thousands of men and women who rushed to the scene of the falling Twin Towers have a higher risk of a myriad of conditions, from cancers to PTSD to digestive issues.

But the true scale is only just coming to light as the victims enter middle age, and the rate of diagnoses – and deaths – sky-rocket.

In a new report published today by the Journal of the American Medical Association, researchers reveal new data showing that cancer is striking the surviving first-responders 10 to 15 years earlier than it would in the general population.

A second report, also in JAMA, hones in on one particularly alarming disease, the rare blood cancer multiple myeloma, finding its precursor is doubly common in 9/11 survivors compared to the general population, and those who develop myeloma get it 15 years earlier, and a much more aggressive form which is difficult to treat.

The findings are the latest bleak reminders that repercussions of the attack on New York City are still being felt, and will likely claim thousands more lives prematurely in the years to come as scientists race to catch up with the scale of those affected. 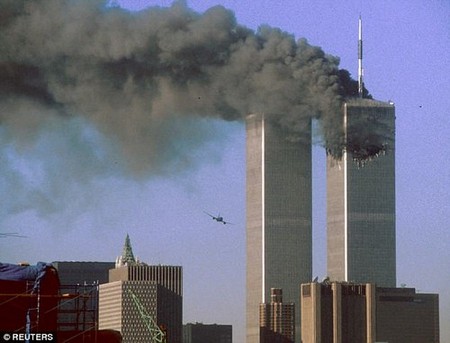 Researchers reveal new data showing that cancer is striking the 9/11 first-responders 10 to 15 years earlier than the general population, and their diseases are more aggressive

‘These figures, you can’t argue with them. There is no discussion to be had,’ said Dr Ola Landgren, author of the myeloma study and top oncologist at of Memorial Sloan Kettering Cancer Center, which sees 20 percent of New York’s myeloma cases.

‘If you just stick to the data and you see they are 10 to 15 years younger than the general population, it’s a more aggressive myeloma, and there is a doubling of the rate of the precursor.

‘Clearly, something is going on. We have learned quite a lot over the last few years about exposures to certain types of chemicals, and we are now more aware of the connection.’

Mark Farfel, director of the World Trade Center Health Registry, estimates around 400,000 responders and civilians are at risk of 9/11-related illnesses.

As of 2016, Mount Sinai’s World Trade Center Health Program had counted more than 5,400 people with 9/11-related cancers alone, not counting the other illnesses.

The first of the two reports published today came from the FDNY World Trade Center Health Program, assessing the future costs and scale of cancers among 9/11 responders.

The team, led by Dr Rachel Zeig-Owens, projected new cancer cases over 20 years among a group of 14,474 FDNY rescue and recovery workers exposed to the World Trade Center disaster site.

Estimates suggest 2,960 new cases of cancer (including more prostate, thyroid and melanoma cancers) among these rescue and recovery workers between 2012-2031, which is far higher than would be expected in similar populations with the same social and racial background.

Among white men in the group, 2,714 new cancers were estimated compared with 2,596 in a comparison group.

Dr Zeig-Owens said the stark figures show more, earlier testing needs to be offered for survivors to catch these diseases as early as possible.

The second study backed up this conclusion by honing in on one cancer specifically: multiple myeloma.

The team found the rate of people with the precursor to myeloma among 9/11 responders was double that in the general population – alarming, but offering an opportunity to catch the disease before it develops into myeloma (which is not always the case, but is a high risk).

Dr Landgren explained it is especially important to catch the precursor in 9/11 responders because their forms of multiple myeloma tend to be more aggressive than others’.

Analyzing the two studies in an editorial for JAMA, American Cancer Society doctor Otis Brawley suggested more needs to be done to quantify how much of this increased risk is associated with firefighting in general, which exposes workers to many dangerous toxins on a daily basis.